Professor Springman was previously Professor of Geotechnical Engineering and Rector at ETH Zurich (Swiss Federal Institute of Technology), one of the foremost technical universities in the world. She is a renowned geotechnical engineer and a pioneer in the study of soil-structure interaction and of geological mass movements that have become more prevalent through climate change.

She has been a full professor at the Institute for Geotechnical Engineering at ETH Zurich since 1997, and was Deputy Head of the Department of Civil, Environmental and Geomatic Engineering from 2013 to 2014. She has broad experience in national and international research, innovation, teaching and governance, ranging from the Swiss Science and Technology Council to the Board of the largest Swiss construction company. She became Rector of ETH in 2015, with responsibility for overseeing the curriculum and guiding the academic mission, only the second woman to hold this position since the founding of ETH in 1855.

She was elected a Fellow of The Royal Academy of Engineering in 2009 and of The Swiss Academy for Technological Sciences in 2015 and will take up the voluntary role of International Secretary to the former in mid 2022.

Professor Springman is an alumna of the University of Cambridge, graduating with a Bachelor of Arts (Engineering Sciences) from Girton College in 1978; a Master of Philosophy (Soil Mechanics) from St Catharine’s College in 1984; and a Doctor of Philosophy (Soil Mechanics) from Magdalene College in 1989. She holds honorary doctorates from the Universities of Bath, Berne, Sheffield, and Wollongong, Australia, and is an Honorary Fellow of all three of her Cambridge Colleges.

In addition to her distinguished career as an academic and a civil engineer, Professor Springman has been an elite-level sportswoman. She represented Great Britain in triathlon between 1984 and 1993, competing in the demonstration triathlon in the 1990 Commonwealth Games in Auckland. She was European Triathlon champion in 1985, 1986 and 1988. She is a former President of the British Triathlon Federation and has served as Vice President of both European and World Triathlon. She is credited with a pivotal role in campaigning for the inclusion of triathlon in the Olympic, Commonwealth and Paralympic programmes and was awarded the CBE for services to sport in 2012.

Professor Springman was named a Dame Commander of the Order of the British Empire in the New Year Honours List for her services to engineering and international sports administration. 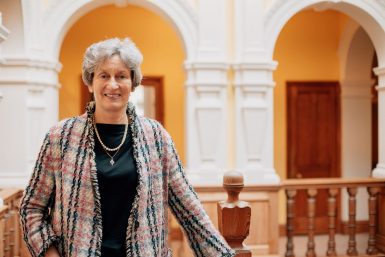