Dr Joyce Mitchell Cook was one of the trailblazing alumnae of St Hilda’s College. The first Black American woman to earn a doctorate in Philosophy in the USA, Joyce became a guide and mentor to generations of women who followed in her path.

After graduating with distinction from Bryn Mawr, Joyce came to St Hilda’s in 1955 to read for a second degree in Psychology, Philosophy and Physiology – a course that was one of the first to include Psychology at Oxford. Fresh from her tutorials with Miss Sybil Crowe at St Hilda’s, Joyce went on to Yale where she achieved her PhD in Philosophy in 1965.

Joyce was known for breaking down other barriers too, becoming the first female teaching assistant at Yale for any non-language class (September 1959 to June 1961) and the first African American woman to teach in the Philosophy department at Howard University (September 1970 to June 1976). After Yale, Joyce had appointments as an analyst for African affairs in the State Department in Washington, as an editor in New York and for several years in the Office of Economic Opportunity. Her academic appointments included posts at Wellesley University, Howard University and Connecticut College.

St Hilda’s has established the Joyce Mitchell Cook Memorial Fund with the ambition of building support from donations and matching funds to create a fully-funded graduate scholarship in Philosophy for talented students from Black and Minority Ethnic backgrounds (BAME) from around the world. Through this important Fund, the College aims to create a new pathway to graduate studies in Philosophy for talented students from under-represented groups.

The new award will ensure that others may follow in Joyce’s footsteps in Philosophy (or Philosophy in combination another subject), and will be a fitting tribute to her remarkable life and career. 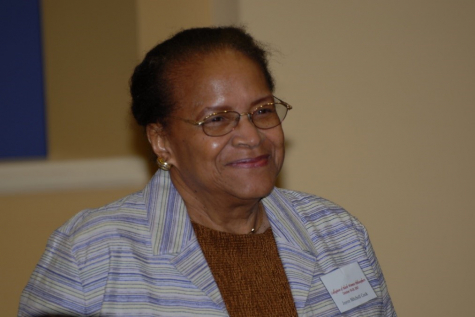 In 2007, Dr Joyce Mitchell Cook was the honouree at the inaugural conference of the Collegium of Black Women Philosophers, where she received a Flame Award. This represents, as the conference convenor Dr Kathryn Sophia Belle noted, ‘the flame within her that made her a trailblazer and example to each one of us. It also represents the light that she has been to our paths, knowing that if she could do it, and if the others like Angela Davis, Adrian Piper, and Anita Allen could do it, then yes, we too could become philosophers.’