The Development and Alumnae Office

The Development and Alumnae Office is the first point of contact for Senior Members. We are always glad to welcome visiting Senior Members and answer general queries. Please call +44 (0)1865 276 828 or email us to get in touch.

Bronwyn was appointed to the post of Development Director at St Hilda's College in July 2007 after five years working in development at Heriot-Watt University in Edinburgh, where she was Head of Development and Alumni Relations. Prior to taking up her post in Scotland, Bronwyn held management positions within the tertiary education sector in Melbourne, Australia for more than 15 years, including a senior post within a leading financial services professional body. She worked with companies to design their professional development programmes and managed project teams to develop national learning resources. Bronwyn's role at St Hilda's is to work with the Principal and Governing Body to implement the College's development strategy and, with the Development and Alumnae Relations team, to build mutually beneficial relationships with a wide constituency of potential supporters of the College.

Fran's first experience of St Hilda's College was as an undergraduate; she came up in 2004 to read Classics. After graduation she took a postgraduate qualification in Psychology at Oxford Brookes University, before moving to Wadham College to work in their Development team, with varied responsibilities including copy writing, events management and reunion fundraising. In 2015 Fran returned to St Hilda's to take on the alumnae communications strategy, managing our termly e-newsletters, social media, the Annual Review, and The Chronicle.

Audrone joined the St Hilda’s Development and Alumnae Office team in 2008. She supports the Development Director, senior staff and members of the campaign boards (UK and US) involved in fundraising for the St Hilda’s College 125th Anniversary Campaign. She also manages our alumnae database. Audrone graduated with an MA in Musicology from the Lithuanian Academy of Music and Theatre. Prior to St Hilda’s, she worked as a researcher at the Institute of Musicology in Vilnius, Lithuania; as Scientific Editor for the Lithuanian Music Encyclopaedia Group; and as a legal secretary for the Valiunas Ellex.

Tríona Adams (English, 1993) took up the post of Alumnae Events Manager, designing and supervising the alumnae events programme with particular emphasis on shaping the 125th Anniversary Celebrations in 2018. Tríona read English at St Hilda’s, followed by an MA at RADA, and was a West End agent for nearly 20 years. As well lecturing, producing and directing, she wrote ‘The Lemon Squeezer’; a Radio 4, Afternoon Play and the basis of her one woman show ‘Nun the Wiser’, and has contributed to many publications including the New DNB. She has lectured in English Theatre History for Florida State, the University of Connecticut, and the Society for Theatre Research (UK). She is chair of the College Media Network, producer of the St Hilda’s Crime Fiction Weekend and Programme Director of the St Hilda’s College Writers’ Day at the FT Weekend Oxford Literary Festival.

Ming came up to St Hilda’s to read Geography in 1992. After graduation she pursued an MPhil in Geography at St John’s College, Cambridge. In 1996 she returned to Asia to work as a strategic planner for the Singapore government, and then embarked on an international career with Royal Dutch Shell. Within the oil & gas sector she has worked in five different countries, primarily in project management and global talent development roles, including on the largest Foreign Direct Investment project in mainland China. As Campaign Officer in the Development team, Ming supports the St Hilda’s 125th Anniversary Campaign with a focus on fundraising for scholarships, bursaries and individual giving, as well as the JdP Music Circles. 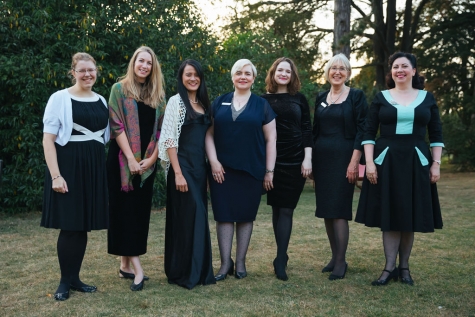