Deanna Lee Rudgard was made an Officer of the Order of the British Empire in 2009 for services in promoting links between universities in Hong Kong and the UK.

Deanna has worked for many years to arrange scholarships for young people from Hong Kong to study at Oxford University and other institutions in the UK, and has continued to mentor and support them during their studies and subsequent careers.

In 1959 I became a student at St Hilda's by default.  My father, who was up in 1923, could only remember LMH, so my headmistress, a St Hilda's alumna, put her own college as an alternative choice.  In early December 1956, some forty of us who had done well enough in the written entrance exams, were summoned to LMH for a week of practicals and interviews to compete for the few places in the small quota allocated to women to read medicine.  The atmosphere was electric.  Anne Crace (now Watson) and I were told to go to St Hilda's for interviews on a blustery, wet day.  We went on foot and arrived looking like drowned rats.  In spite of this St Hilda's accepted us both and we have been firm friends ever since.  I was the first Chinese girl from Hong Kong to pass the entrance exam for Oxford.

St Hilda's was absolutely the right place for me.  It was a small, friendly college.  From the Principal, Kathleen Major, to my scout, Elsie Burden, everyone cared about this diminutive Chinese girl who was still not yet eighteen.  I felt completely at home and was extremely happy throughout my undergraduate years.  My fellow students frequently invited me home and they and their parents became my friends for life, as did those who taught me.  I felt I was being educated in every way and not just academically.  This has been of great benefit to me as unforeseen events in life have taken me away from medicine into the corporate and financial world.

It is because of Oxford and St Hilda's that I have coped and succeeded, managing to learn on my feet as I faced my challenges.  St Hilda's gave me courage, tenacity and style, three qualities I find important for a woman in the modern world.  The achievements and honours that have come my way owe a substantial debt to my College. 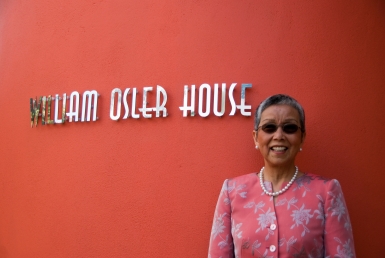