Each term, St Hilda’s graduate students hold a MCR Research Symposium, at which selected students present their research to College members and visitors. Geoffrey Liddell (Engineering, 2016), was winner of our Middle Common Room Research Poster Competition in Hilary Term 2021. He presented on his poster, Wood Decomposing Fungi at an online event. Geoffrey’s interests are Ecology and Biological Networks and he has been involved in groups studying transport in fungi, heartrot in trees. Geoffrey is currently working on a Master’s project simulating damage to water transport network of leaves.

At the event, Geoffrey gave an overview of two different projects that he has been involved in: the first on investigating fungal decay in oak and beech; the second on imaging transport phenomena in fungi.

The first half of the talk was on 'heartrot', which refers to the fungi inside the trunks of living trees. There were examples of where to see trees with common fungi in around Oxford: Fistulina hepatica ("beefsteak fungus") in oak trees around Magdalen and Laetiporus ("chicken of the woods") in many of the willow trees on the Cherwell. Heartrot may not sound like a very positive name but they aren't necessarily bad for the trees, as they live in non-functional parts of the trunk. They might, in fact, provide benefits like protection against colonisation by pathogens! In the case of willow, some species quite regularly propagate by falling over and rooting (there's a good example next to the Marston-Ferry cycle path), in which case a slightly weakened trunk might have little to no negative impact at all.

In the second part of the talk, in contrast with the heartrot species, Geoffrey spoke about non-resource-unit-restricted fungi: where most heartrot species are strictly confined to the piece of wood or tree that they germinate in, the non-resource-unit-restricted ones can forage around for other branches or even stretch from tree to tree. They including things like dry rot and honey fungus (also regularly seen around the parks of Oxford) and the formation of mycelial networks is much more obvious at the macro scale in this type. For context, the network in the picture attached is around 15cm across.  The large visible hyphae are called 'cords' and are made up of bundles of vessels; in the lab it's possible to look at transport along these cords over up to distances of tens of centimetres using a radio-labelled, un-metabolised amino acid. This is of special interest because fungi don't have to the same mechanisms for moving fluids that the larger members of the plant and animal kingdoms rely on.

A previous Research Symposium featured five graduate student students from a range of disciplines, from medieval history to twenty-first century immunology, who spoke on the theme of 'The Five Senses - Sensory Stimulation in Education, Marketing, Neuroscience and Art':

The St Hilda’s Philosophy Forum is a Middle Common Room event that is open to anyone interested in philosophy. The Forum takes place on Thursdays of Weeks 1,3,5,7 of Hilary Term. A recent topic was ‘Free Will and Ethics – The Threat of Determinism’. 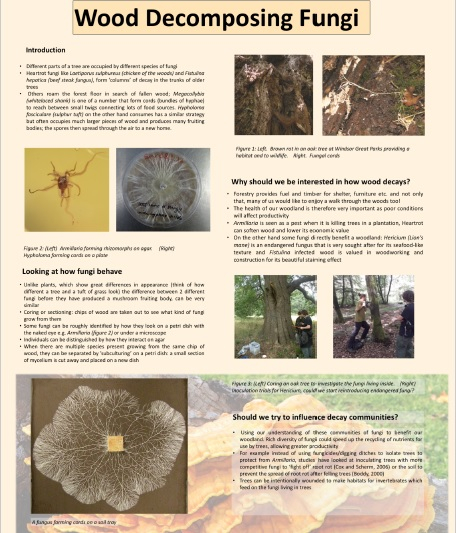 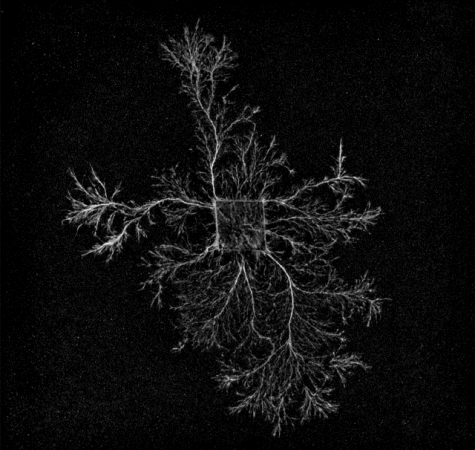 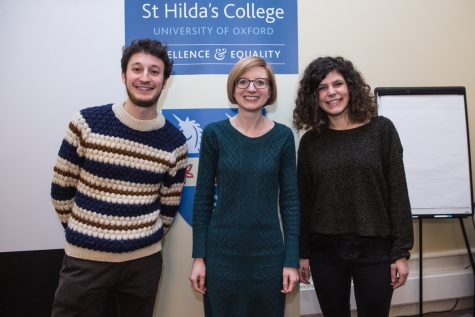 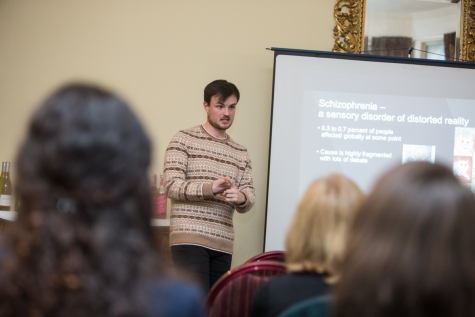