Take a look at our photo gallery of our student sports people, musicians and actors.

The JCR website will give an insight into life here. One of the annual highlights at St Hilda's is the May Ball, which our students plan and organise as well as attend. The hub of undergraduate life at St Hilda’s is the Junior Common Room, which has a bar, lounge area, buttery, television and a wide range of newspapers and periodicals.

St Hilda’s has a number of very active sports teams. The following students achieved Blues* in 2018/19:

The Arts at St Hilda’s

Dance, poetry, drama, photography, fashion design, sculpture, creative writing, or music - whatever your artistic passion, there's a way for you to develop, share and enjoy it at St Hilda's. With concerts and recitals, art, sculpture and photography exhibitions, dance and choral workshops, readings, drama productions and an Arts Festival all held within College, St Hilda's students enjoy one of the most exciting college-based cultural environments in Oxford. St Hilda's team won three awards in the Drama Cuppers** 2017 for their performance of The Tell-Tale Heart by Edgar Allan Poe: Best of Cuppers, Best Actor (Niimi Day Gough), and Best Design (George Twinn and Eva Newton).

** Cuppers are intercollegiate competitions at the Universities of Oxford and Cambridge. The term comes from the word “cup”.

Dance, poetry, drama, photography, sculpture, creative writing or music? Whatever your artistic passion, there's a way for you to develop, share and enjoy it at St Hilda's.

A message from the Director of College Music, Dr Jonathan Williams

With concerts, exhibitions, workshops, readings and drama productions all taking place within College, St Hilda's students enjoy one of the most exciting college-based cultural environments in Oxford. St Hilda's award-winning Drama Society puts on a performance most terms.

St Hilda's commitment to music is particularly strong and its facilities are world class. At our Jacqueline du Pré Music Building - with its Steinway D concert grand piano, recording studio and well-equipped practice rooms - you can be sure that whatever your musical tastes, you will have every opportunity to enjoy music. If you play an instrument or sing then you can join our orchestra or choir and take part in the termly concerts at the JdP and at the University Church. You could form your own chamber ensemble or band, or just make the most of our wonderful practice facilities. And of course, we have a world-class venue where you can attend free recitals every Thursday lunchtime during term and where you can hear professional concerts for as little as £5. Keeping reading for more information and feel free to contact me about how to get involved.

The Choir of St Hilda's College is at the heart of the College, performing at the big college events throughout the year. Highlights include performances of Fauré's Requiem, Haydn's Nelson Mass and the premiere of Nicola Lefanu’s cantata Hilda of Whitby, all with the orchestra at the University Church. The choir represents the College further afield too, most recently going on tour to Herstmonceux Castle.

Tom Carr, one of St Hilda’s second-year musicians, is our new Assistant Conductor. Rehearsals are in the JdP every Thursday from 5.30pm until 6.45pm, followed by a free meal and wine in the College dining room. No audition is necessary and all are welcome to come and sing. This term we will be singing Vivaldi’s Gloria and lots of favourite Christmas carols.

The College Orchestra and other ensembles

The College orchestra performs once a term after a period of focussed rehearsal. There are, in addition, numerous other smaller-scale chamber groups such piano trio, wind quintet and string quartet. The College jazz band performs regularly too.

St Hilda's College is unique in offering weekly concerts performed by members of College, students from across the University and professional musicians. These half-hour events are held at the JdP on Thursday lunchtimes during term, starting at 1.15pm. Entry is FREE. They are a wonderful opportunity to enjoy music in a friendly atmosphere and to take a break from work for a while.

The Jacqueline du Pré Music Building (JdP) is a purpose-built world class concert venue built in memory of the outstanding cellist and honorary fellow of St Hilda's, Jacqueline du Pré. With as many as 50 events taking place at the JdP every term, there's always something to enjoy. A list of all the events is available on the JdP website. College members enjoy significant discounts on ticket prices.

At the heart of the JdP is the Edward Boyle Auditorium (with our superb Steinway model D grand piano), a recording studio and four practice rooms which house a Steinway model B grand piano, four new Yamaha upright pianos (including one 'silent' instrument) and a harpsichord. These rooms are available to all St Hilda's students, seven days a week, from 7am to 11pm (subject to recordings and concerts). Practice rooms can be booked on the JdP room booking page on the college intranet and the Auditorium by contacting jdp@st-hildas.ox.ac.uk.

Many St Hilda's students also participate in the religious life of the College and the University.  Almost all faith groups are represented by University student societies.

The Chaplain is The Revd Canon Brian Mountford MBE. The College also appoints an undergraduate Chapel Assistant. The Assistant’s job is to publicise events and get to know those students who are interested in chapel activities. On Founder’s Day, Wednesday of week 6 in Michaelmas Term, a College Service is held in the Jacqueline du Pré Music Building. At Christmas, many people join in Carols on the Stairs on Wednesday of week 8. There is also a Christmas Concert at the University Church on Wednesday of week 7. Once a term St Hilda’s joins with Oriel College Chapel for a service and meal together.

The Hindu Mandal in Oxford is very near College, as is the Central Oxford Mosque. There is a University Jewish Chaplaincy, and an Oxford Synagogue. For these and other places of worship, please see the University's Equality and Diversity webpages. 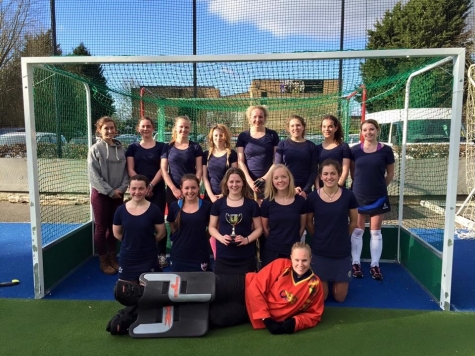 "Cuppers champions for another year running: what a fitting end to a fantastic season of hockey!"

"St Hilda's has a beautiful site and an inclusive atmosphere. It is always nice to come back to College."