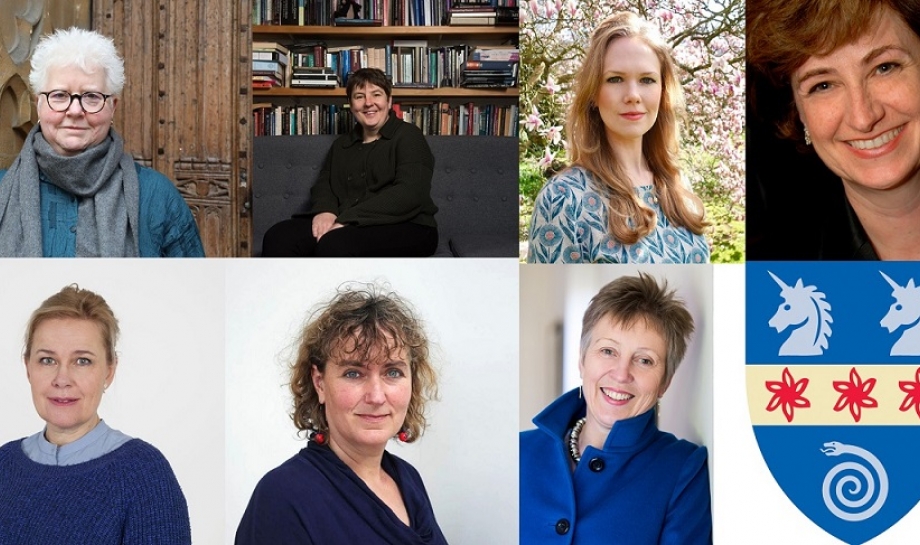 Welcome to the St Hilda's Writers' Day at the OLF 2020

The year 2020 was to have been St Hilda's 11th as the only college curating its own day of sessions at the FT Weekend Oxford Literary Festival. As ever, we had an outstanding line-up of speakers, all of whom are members or friends of College. The 2020 Festival, like so many events, has been postponed due to COVID-19. While we all hope to rearrange in full at a later date, we can now bring you our speakers and their subjects right here, in the comfort of your own home. With specially recorded films as well articles, reviews and links, there is a wealth of material here. So take your time to explore and enjoy. I'd like to thank all our contributors who have been so generous with their time.

Bronte, Murdoch, D.L. Sayers; I am sure that some of your favourite authors are featured in this treasury. Very much keeping it in the St Hilda's family, the collection is not only edited by and features contribtions from alummae; it also celebrates Honorary Fellow, P. D. James, and novelist, Barbara Pym (English, 1931). See also the Barbara Pym Society.

Maltby and Shell have edited this new collection of essays, Anglican Women Novelists: From Charlotte Brontë to P D James (see TLS review here), exploring the ways in which Anglicanism and the Anglican Church affected the work of these significant women writers. The essays throw light on both the development and the diminishment of the Anglican Church over the last two centuries and on the changing roles of women in the Church of England and in wider society. 'Both entertaining and enriching' - A.N. Wilson

And while we're here... If you like this, you would love this little film. Shot in 1991 at Barbara Pym's real home and village and featuring her friends and family, it stars Patricia Routledge and was directed by a certain James Runcie: Miss Pym's Day Out

Fashion journalist and guru, Marion Hume introduces Julie Summers, the researcher, historian and author of Dressed for War: The story of Audrey Withers, Vogue Editor extraordinare from the Blitz to the Swinging Sixties. Read the five-star review from the Telegraph here: Dressed for War by Julie Summers, review: how Vogue stayed stylish through the Blitz. In this book, Julie Summers reveals the story of Vogue and Audrey Withers during World War II, when the magazine forged a new identity that set it up for the rest of the 20th century. Withers was extraordinary, a visionary. She worked with Lee Miller, she commisioned Cecil Beaton's seminal fashion shots of blitzed London, and she carried on issuing Vogue from a bomb cellar, all whilst wearing a hat. In response to Marion Hume, Julie has recorded these fabulous films revealing what Audrey would have done in circumstances now bizarrely similar to those we are facing today.
And, in order to do so, Julie wore a hat.

Val McDermid (English, 1972), crime writer and playwright, introduces Shakespeare and Marlowe: Rivals, Collaborators, or Aliases – an Early Modern Mystery. She discusses her forthcoming play And Midnight Never Come, commissioned by the Royal Lyceum Theatre in Edinburgh. The play deals with the notoriously controversial circumstances of the death of Christopher Marlowe. Professor of Shakespeare studies at Hertford College, Oxford, and the author of This Is Shakespeare, Emma Smith responds to Val McDermid, considering what a fictional detective might make of the case.
Emma Smith's vastly popluar podcasts are available here. She has published and lectured on Shakespeare and early modern dramatists.
Val is a mainstay of the St Hilda's College Crime Fiction Weekend. This year's theme is All Our Yesterdays: Historical Crime Fiction.

Claire Armitstead introduces the work of Laura Cumming, the award-winning writer and art critic. On Chapel Sands, follows the author's pursuit of the truth about her mother’s mysterious disappearance as a small child. Cumming’s mother, who grew up to be an artist, was kidnapped from a Lincolnshire beach in 1929 and found five days later in a local village. She remembered nothing of the events and only learned of them 50 years later. ‘On Chapel Sands is much more than a search for truth. It is a moving, many-sided human story of great depth and tenderness, and a revelation of how art enriches life. In short, a masterpiece’ – John Carey

On Chapel Sands has just been longlisted for this year's Royal Society of Literature Ondaatje Prize, rewarding fiction, non-fiction or poetry which best evokes the spirit of a place.

In the Shadow of Vesuvius: A Life of Pliny
with Daisy Dunn (Classics, 2005) and Nicolette Jones (English, 1978)

Classicist Daisy Dunn celebrates the lives of Pliny the Younger and Pliny the Elder – two outstanding minds of the Roman empire who had lasting influences on the world in In In the Shadow of Vesuvius: A Life of Pliny. Pliny the Younger watched as his uncle and guardian Pliny the Elder sailed towards the erupting Vesuvius. Pliny the Elder never came back but Pliny the Younger went on to become a Roman senator, lawyer, poet, representative of the emperor and chronicler of the Vesuvius disaster. Dunn writes and reviews for national newspapers and is editor of the Greek culture magazine Argo.

Author and critic Nicolette Jones introduces Daisy Dunn and her talk on 'The Plinys and the Eruption of 79AD'.

We hope you have revelled in our virtual event. Please continue to follow the work of our authors, speakers, alumnae and friends.