"After the massive success of the first virtual meeting of the History Society, I couldn’t wait to see what was to follow in the next one. When I received the email a week before introducing the speaker and topic, it became evident that this anticipation was not misplaced. It appeared to be the perfect union of my two passions, history and drama, and I was certainly not disappointed.

Our speaker was the historian and author, Professor Sally Alexander, Professor Emerita of Modern History at Goldsmiths University of London, and one of the women’s liberationists who flour-bombed the stage at the 1970 Miss World competition, as shown in the 2020 film, ‘Misbehaviour’. Professor Alexander led one of the most candid and insightful discussions that I have heard. She focussed on her experience of being depicted on film, as well as the events and incentives behind the movement that inspired ‘Misbehaviour’, the story of how feminists disrupted the Miss World protest. In the film, which was directed by St Hilda’s alumna, Phillipa Lowthorpe (Classics, 1980), Sally is played by Keira Knightley.

The meeting opened with a discussion of the very bizarre experience of watching oneself portrayed by another on screen while reliving the historical events that were such an important part of one’s life. It was not merely a discussion about how anxiety-inducing and frustrating this unique experience can be; Sally’s scholarship in women’s and feminist history naturally informed all aspects of the conversation. As well as hearing first-hand about the organisation of such a renowned protest and the Women’s Liberation Movement, a discussion regarding the relevance and value of film as a historical educational tool featured. A very engaging and honest conversation concluded the meeting, and I can happily confirm that Sally is all for dramatisations of historical events despite the natural discomfort she felt when watching her life on screen. She affirmed that sometimes “people need a spectacle” and film is an apt format for revitalising and universalising moments in history that remain relevant and pertinent to events going on in society today." 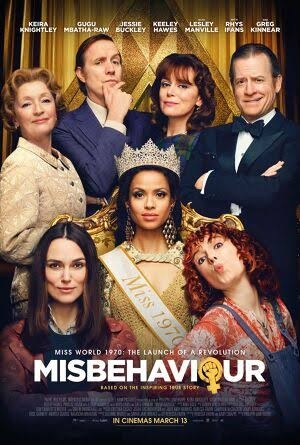