With the loss of the Milham Ford Building, the College Chapel has moved to a temporary location in South 45 (in the Sacher Wing of South Building). It will reside here for the next two years until our new buildings give the College a permanent Chapel. Please see the Chapel Term Card for the events calendar (on the chapel noticeboard in the entrance vestibule to South Building, by the Dining hall). Please also feel free to use South 45 as a quiet space for contemplation and prayer.

The Chaplain, Canon Brian Mountford, has his office in South 47, and as a member of the College's Welfare Team, he welcomes approaches from students seeking support and advice, whether relating to their religious belief and practice or more generally to pastoral matters.

The approach of the chaplaincy is ecumenical and inclusive and, since we have no Sunday services at St Hilda's, many students participate in the wider religious life of the University, in churches and other college chapel choirs. Almost all faith groups are represented by University student societies and it is possible for people of all faiths to find a spiritual base. The Hindu Mandal in Oxford is very near College, as is the Central Oxford Mosque. There is a University Jewish Chaplaincy, and an Oxford Synagogue. For these and other places of worship, please see the University's Equality and Diversity webpages.

While research shows that about half of the British population claim to have ‘no religion’ at all, it also shows that there’s still a widespread desire for faith. The big questions don’t go away: the origins of the universe and of life, whether there are universal ethical principles, the meaning of self (who am I?), the idea that there might be something greater out there, the intuitive sense of the Divine Other. Each term there are two chapel discussion groups which address these and similar issues.

The Revd Canon Brian Mountford MBE was until recently Vicar of the University Church. The College also appoints one or two undergraduate Chapel Assistants each year to help organise and publicise chapel events. In addition, the Chaplain organises occasional services such as baptisms, marriages, and memorial services. In September he conducts the Annual Gaudy Service in College.

Compline is said in South 45 every Tuesday during term time at 8pm.

Is there anything else the chapel could do for you?

Do you have a suggestion that will improve the work of the chapel? Would you like to talk or have support from someone from the chapel? Please contact us: 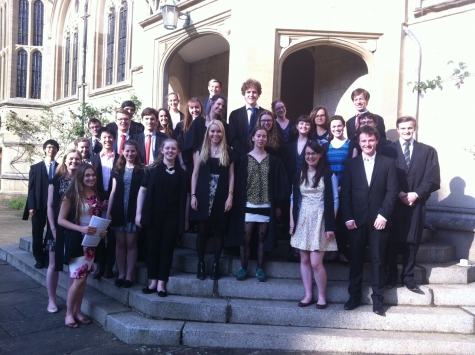