Plant of the Month - 'Bleeding Heart' or Dicentra spectabilis 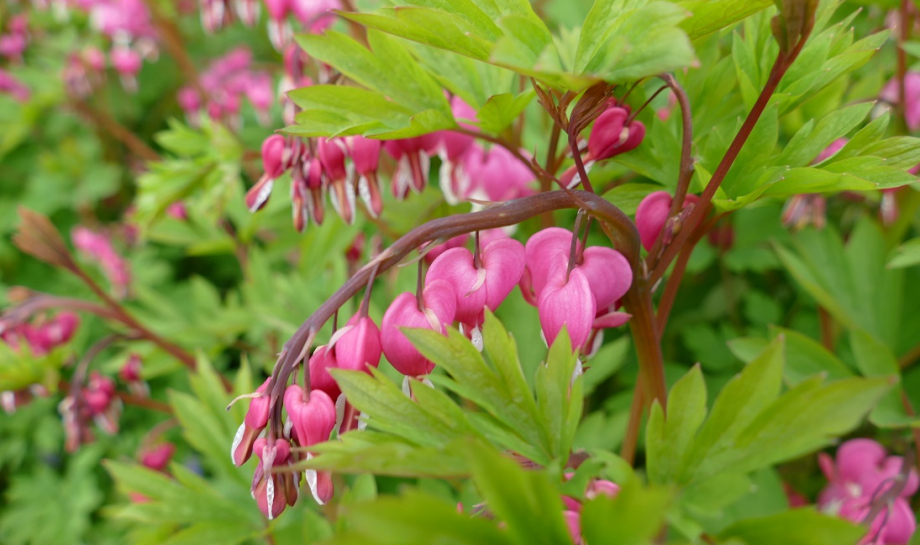 One of the beautiful plants gracing Hall Garden's Blossom Border is the Dicentra spectabilis synonyms with Lamprocapnos spectabilis.

Also known as 'Bleeding Heart', this plant has several more common names, including Dutchman’s Breeches, Lady’s Locket, and Lyre Flower. These names have been acquired in an attempt to describe the heart-like rosy red flowers when they are in bud. The flowers are produced on long elegantly curving racemes of twelve or more flowers. Once the flowers open they have another set of common names which include Lady-in-the-bath, or Lady-in-the-boat which describes an individual flower if it is picked from the raceme and turned upside down.

The plant was originally introduced from Japan in 1810 but is also found in northern China, Korea, and Siberia. Surprisingly, it is in the poppy family, Papaveraceae. It is one of a small group of early flowering perennials prized not only for their flowers but also for its elegant foliage which emerges from mid-February onwards. The Bleeding Heart requires a sheltered spot preferably frost free, and it prefers dappled shade particularly in the early part of the day. It grows quickly from late February onwards and then rapidly produces lots of flower buds. Our plants thrive in the border at the furthest end of the Hall Garden and we are enjoying their beautiful colour.