A Microscopic World of Possibilities 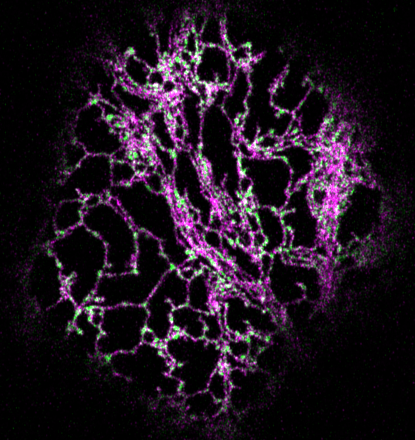 Genetic engineering tools in plants allow us to insert genes from other organisms into plant hosts. This is done for many purposes, such as using plants as "biofactories" to produce such useful compounds as antibodies, vaccines, and enzymes for crop improvement, or for introducing other novel traits. In this image of a single plant cell, fluorescent proteins show the endoplasmic reticulum (an extensive network-like organelle within the cell) containing part of an enzyme from bacteria which captures methane gas. The image is an overlay between two channels: the green channel shows a marker of the endoplasmic reticulum and the red channel shows the tagged bacterial protein, with an overlap between the two signals.

This is part of an ongoing project by fourth-year Interdisciplinary Bioscience PhD student, Tatiana Spatola Rossi that uses live cell imaging to study the ability of the endoplasmic reticulum to harbour several bacterial proteins in plant cells in an attempt to use plants for the capture of atmospheric methane. Plants act as a funnel for methane gas in two environments that contribute largely to global emissions: paddy fields and natural wetlands. Although some strategies have been studied to reduce methane emission from paddy fields, no solution has been implemented to date that effectively reduces the carbon footprint, maintains a high grain yield, and is accessible for local farmers. Further innovation in the field may provide alternative solutions and could reveal that the secret for a methane trap lies in the world of metabolic possibilities provided by bioengineering.

Tatiana Spatola Rossi is reading for a PhD in Interdisciplinary Bioscience (DTP) associated to the Department of Plant Sciences.