Inspired by all the St Hilda's Crime Fiction Weekend excitement, Librarian Dr Jill Dye has been looking at examples of that genre from our library and archive collections.

The College Library contains several works in the genre of crime fiction, well-used by staff and students alike. Many of these works have links to the College, including the legendary authors Val McDermid (alumna) and P.D. James (Honorary Fellow). Alumna Mavis Doriel Hay’s 1935 novel takes place in a fictional Persephone College, the riverside landscape of which sounds eerily familiar…

Since 1994 the College has drawn readers from all over the world to the St Hilda’s Crime Fiction Weekend to hear their favourite authors explore the genre, and discuss their own work and the writers who have inspired them. This annual event has quickly become part of the College’s history, and its ephemera is now collected and preserved in the College Archive.

If you're attending the Crime Fiction weekend, or visiting the College for any other reason, please feel free to visit the display case in South Foyer to enjoy some of these items in real life! 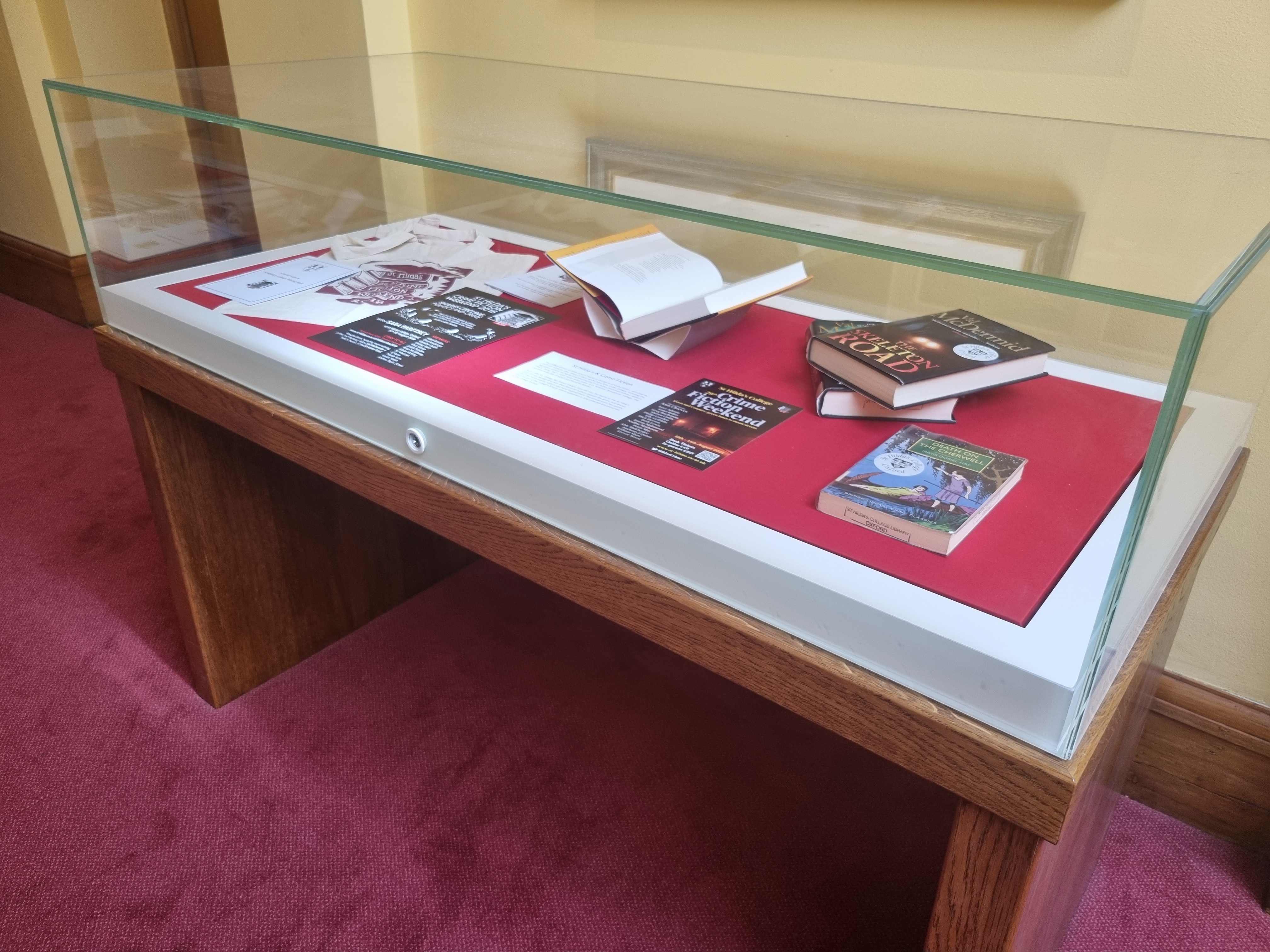 Oxford’s rich history of gardens dates back over 400 years. Oxford’s Botanic Gardens opened as the Oxford Physic Garden on 25th July 1621, for the purpose of growing medicinal herbs for teaching medical students. Herbals, such as the one on display, contain many examples of plants that would have grown in the Physic Garden, including Cowslips and Primrose. The leaves of cowslips were used in tea and preserves to procure sleep and the root of primroses were used to treat sneezing and headaches. Nearly 220 years later in 1840 the Physic Garden became known as the Botanic Gardens. Today it conserves plants from around the world and supports the University’s teaching and research.

The Oxford Botanic Gardens expanded to include the Harcourt Arboretum when the University acquired the estate of Nuneham House, near Nuneham Courtenay in 1947. Nuneham House was the seat of the Earl of Harcourt, built in the mid-1750s. Renowned English gardener, Lancelot ‘Capability’ Brown re-landscaped the gardens in the late 1770s to include a looped woodland circuit. In 1786, the upper section of the Carfax Conduit House (which formed part of Oxford’s early water system) was moved from the centre of Oxford into the grounds of Nuneham. The land at Nuneham House were further developed in the 1830s by Sawrey Gilpin and the arboretum was established. There are now more than 130 acres at Harcourt Arboretum.

The origins of the gardens at St Hilda’s also lie with the Botanic Gardens. Cowley House (the foundation of Hall Building) was built by Dr John Sibthorp during his time as Professor of Botany 1785-96 on a site deliberately chosen due to its proximity to the Physic Garden. It is thought that the original lilac tree in St Hilda’s gardens was from a scion obtained during Dr Sibthorp’s travels in Asia Minor. He was also responsible planting thorns, prunus and amylaucia. Cowley Grange (now South Building) was built in the 1870s and the gardens were first laid by Christ Church chemistry tutor Augustus Vernon Harcourt.

“Naturally everyone thinks their own college has the most beautiful garden, and S. Hilda’s, with its waterway and views of Merton and within sound of all the bells, is, I think, the loveliest, although the smallest of the women’s college gardens. Seen from the river, part of S. Hilda’s South garden is a miniature vision of spring – the violet, mauve, pale yellow and white of the irises, the rock-garden with violas, thrift, phlox, aubretias, rock roses, London pride and forget-me-nots, the poppies and in the background the brooms, and to the left the orchard of buttercups, sorrel and a white mist of cow-parsley.”

A small cedar tree was planted by Hall Building to commemorate the founding of the College by Dorothea Beale in 1893, and today, St Hilda’s is the only college to have three types of cedar trees in its grounds: Lebanese, Atlas and Himalayan cedars. 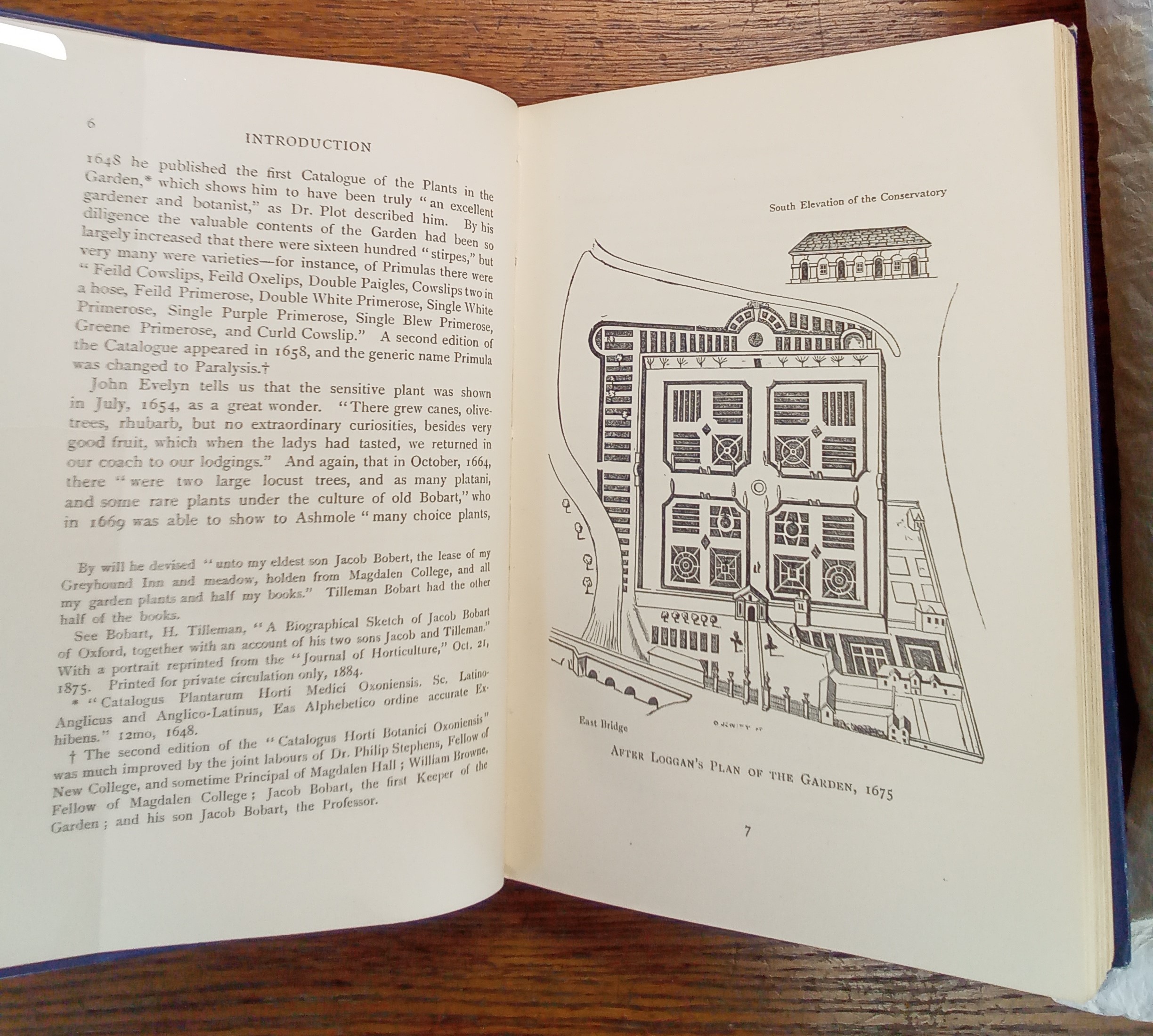 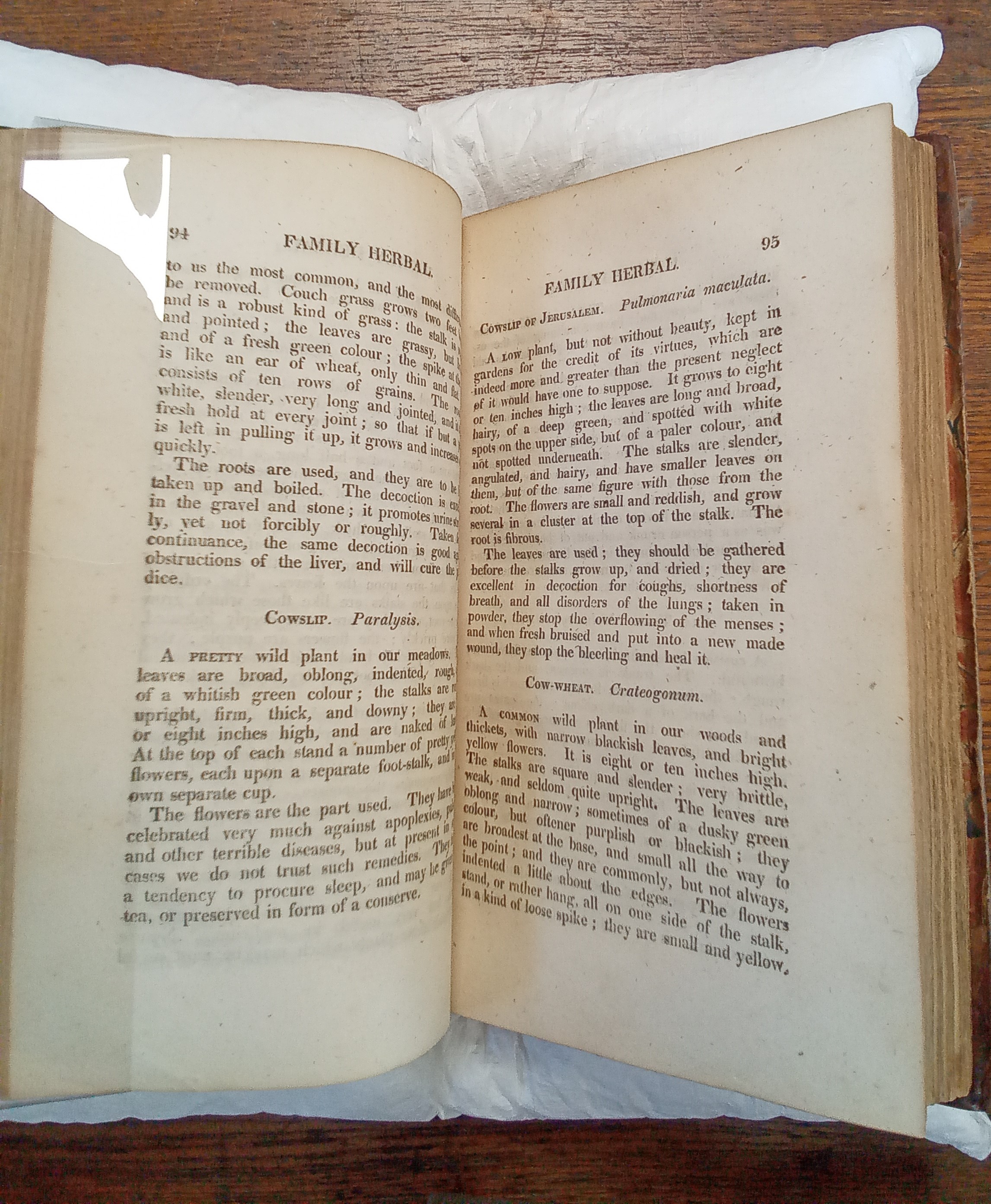 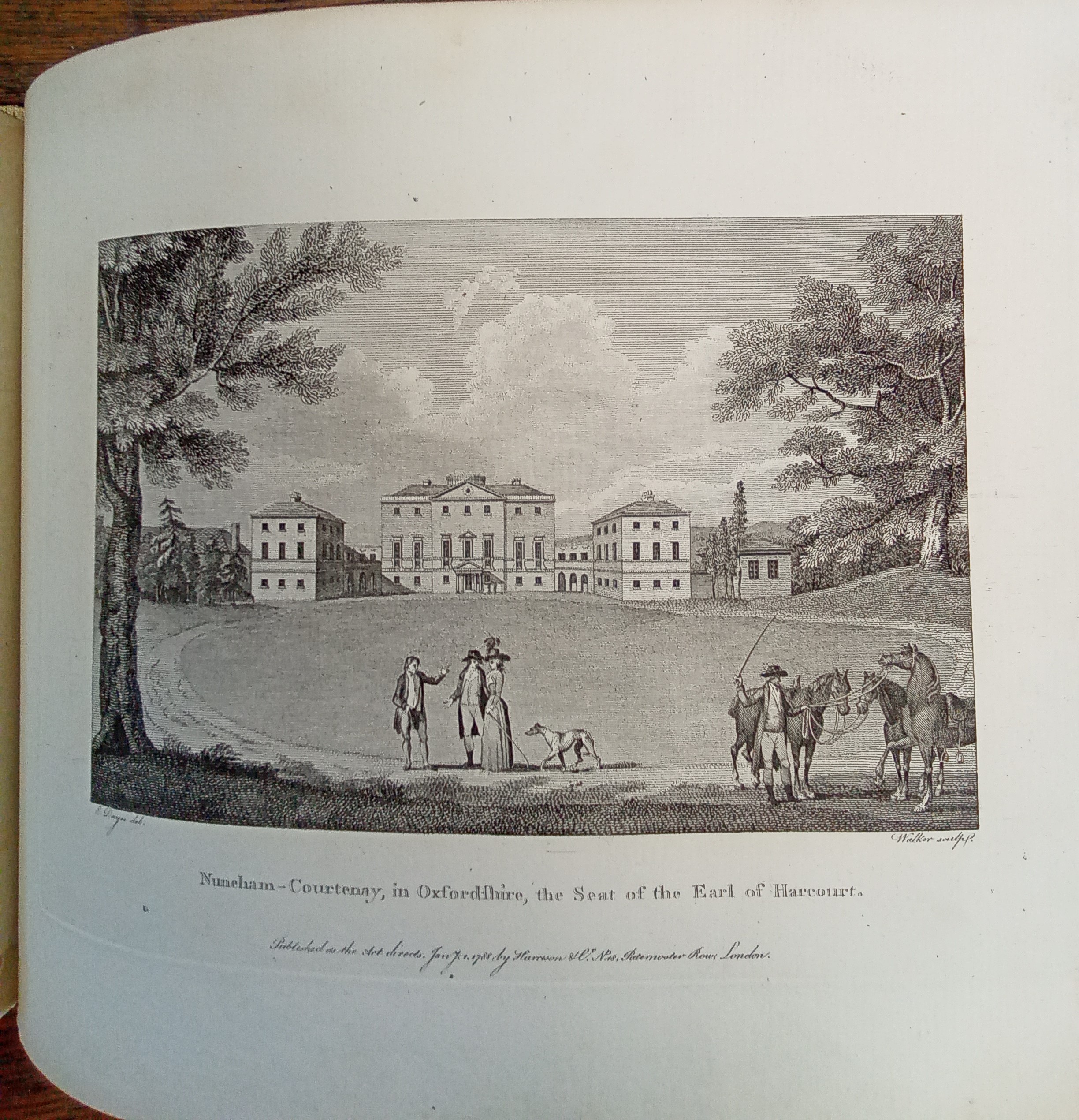 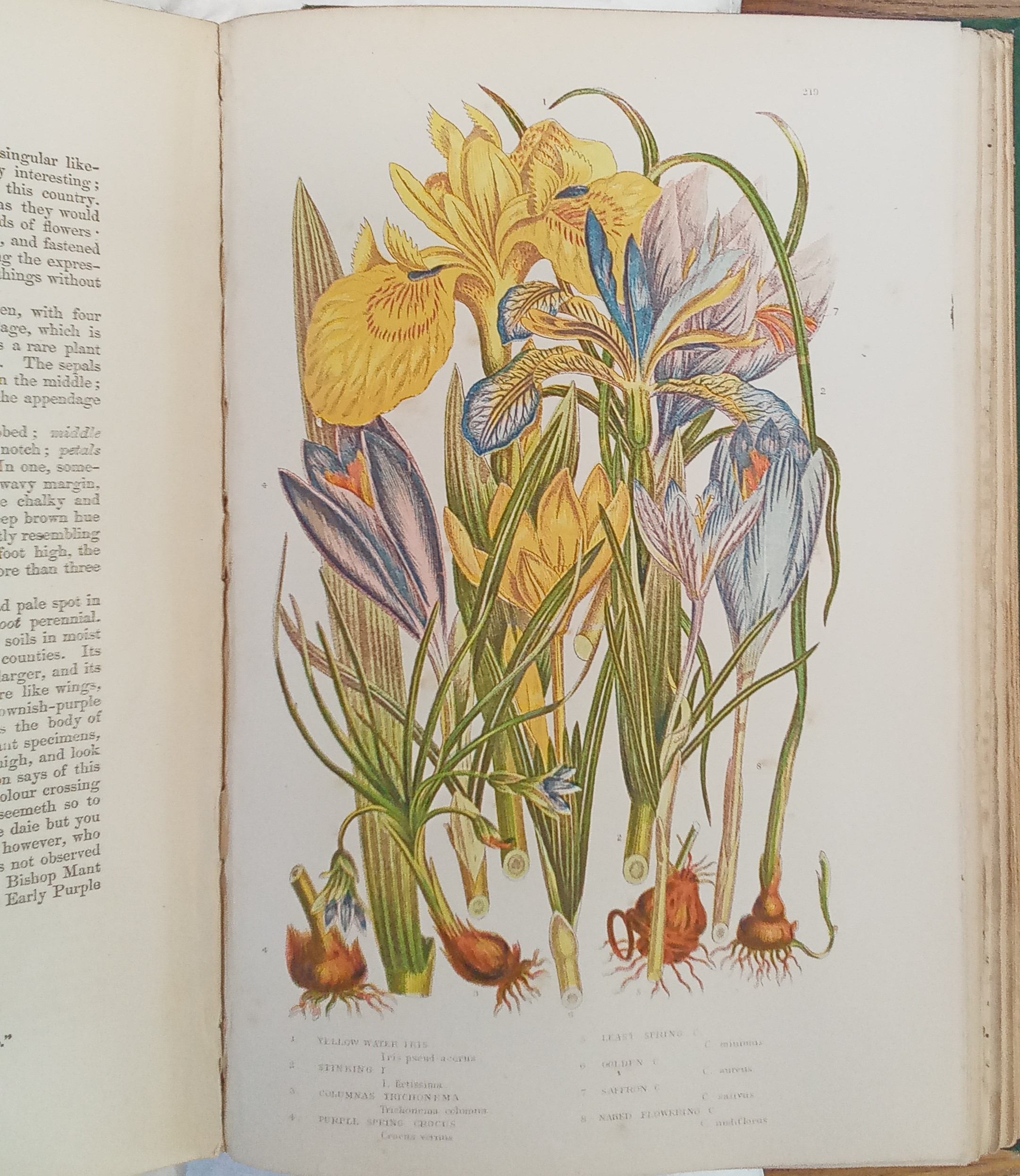 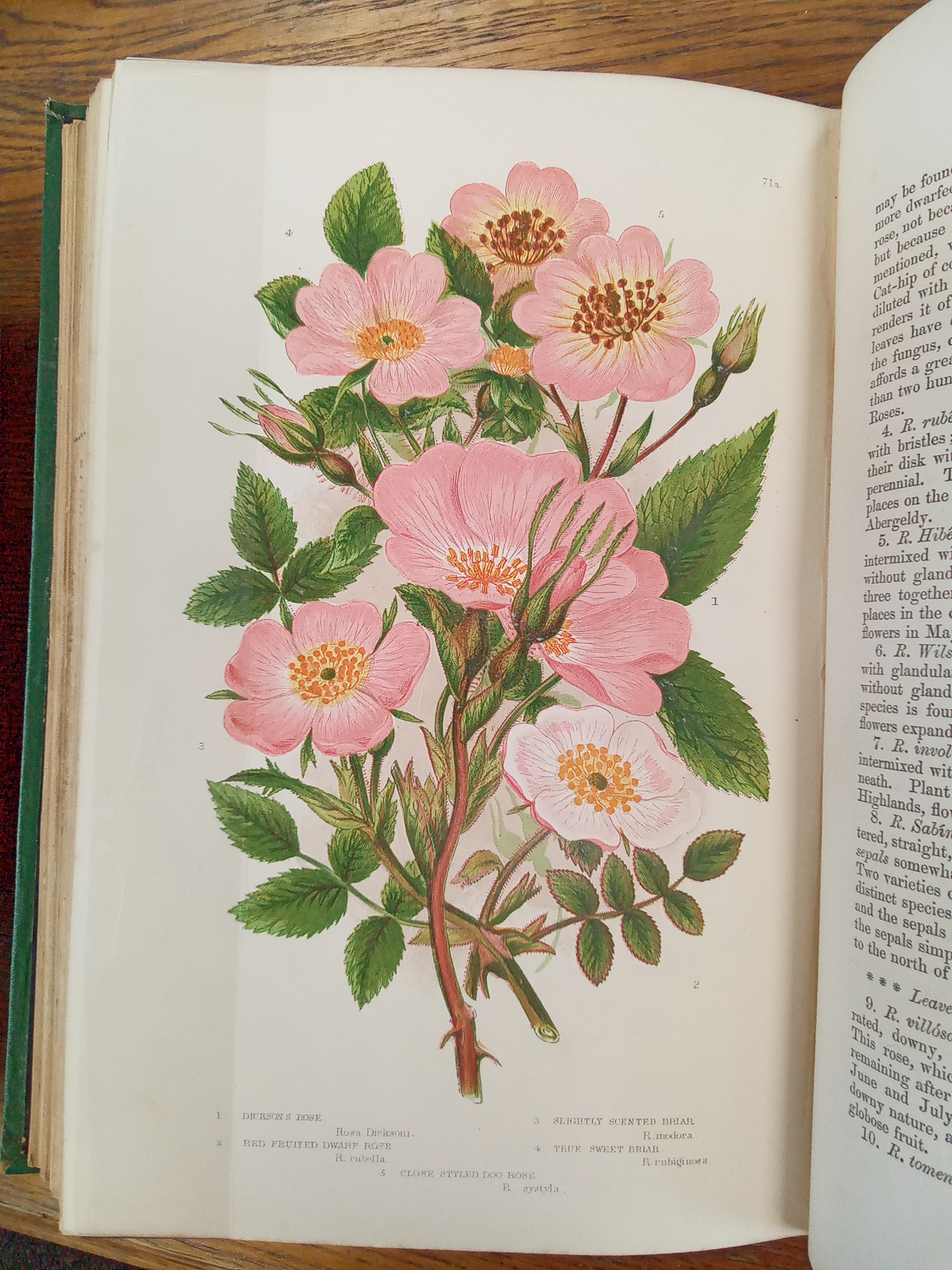 Our Archivist, Oliver Mahony, takes us through the long history of student activism at St Hilda’s.

At its foundation, as a women’s only Hall, the College was at the forefront of student debate around suffrage and the recognition of women by the University. The 1970s and 1980s saw increased instances of student direct action in response to a lack of university student representation and as a protest against government policy.

The Fritillary was an early student newspaper produced by students of the original all women’s Halls and The Society of Home Students. A short report [bottom of page 90] about the OWSWS meeting held at Lady Margaret Hall mentions the Suffrage pilgrimage march which took place that summer and included a leg though Oxford.

St Hilda’s also has its own tradition of student newspapers, filled with evidence of student political and social action. Direct action against government policy and the absence of student representation in university decision making was a feature of the early 1970s student life. ‘Pressure Cooker’ dates from the 1970s, with this issue reporting on the student occupation of the Indian Institute and the forceful removal of the protestors by the proctors and police. ‘The Hildette’ was produced in the mid-1980s, with the issue on display featuring articles relating to women's career opportunities after graduation and a piece about a university society offering support for refugees. Later editions feature boycotts relating to apartheid, CND (Campaign for Nuclear Disarmament) action and debates relating to the women’s rights movement.

Today, St Hilda’s students continue to take a passionate stance on a variety of social and political issues; from the Black Lives Matter protests against the Cecil Rhodes statue on the High, to gender equality, pushing for divestment in fossil fuels and advancing LGBTQ+ rights. We continue to collect evidence of this action for the archive to give an insight into student life today for the researchers of the future.

“Last Tuesday Mrs Fawcett came to L.M.H. to the Oxford Students' branch of the Women's Suffrage Society on the future work of the union. She is awfully nice, and doesn't look nearly as old as she must be. She said that the future work of the union must be to secure votes for the women still left unenfranchised [sic] by the Franchise Bill, and also to work for reform of the laws which bore more hardly upon women than on men.” 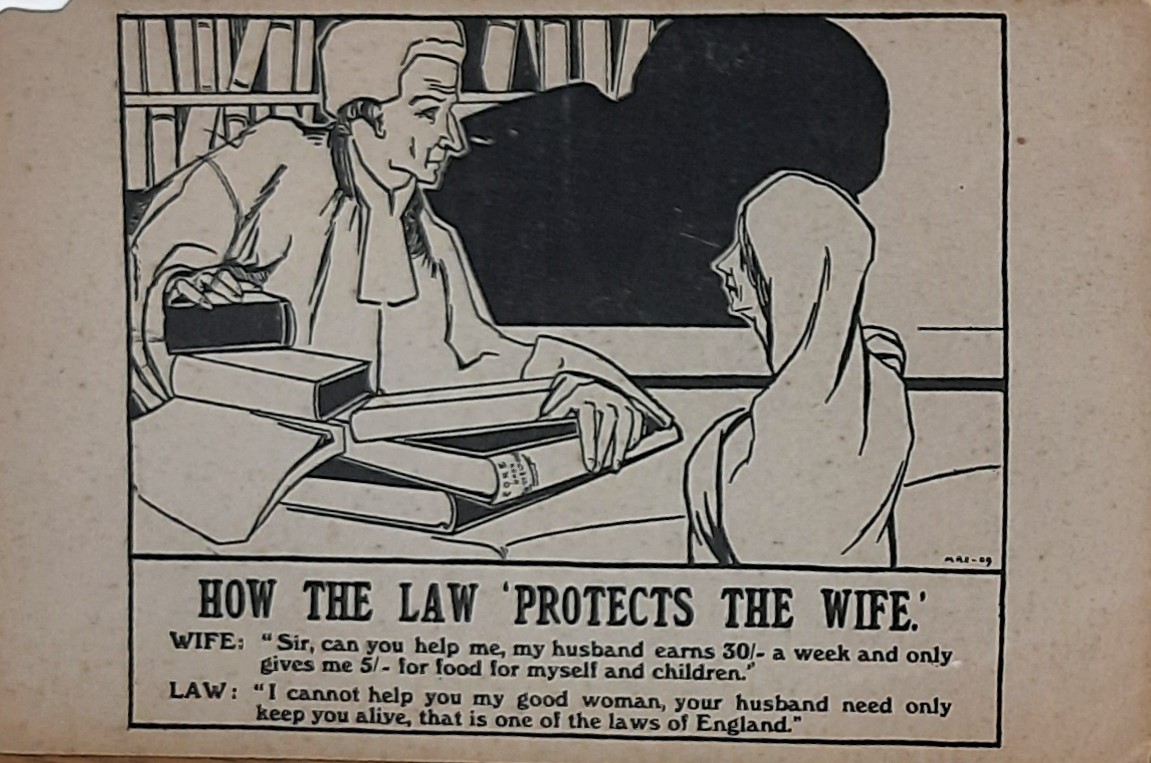 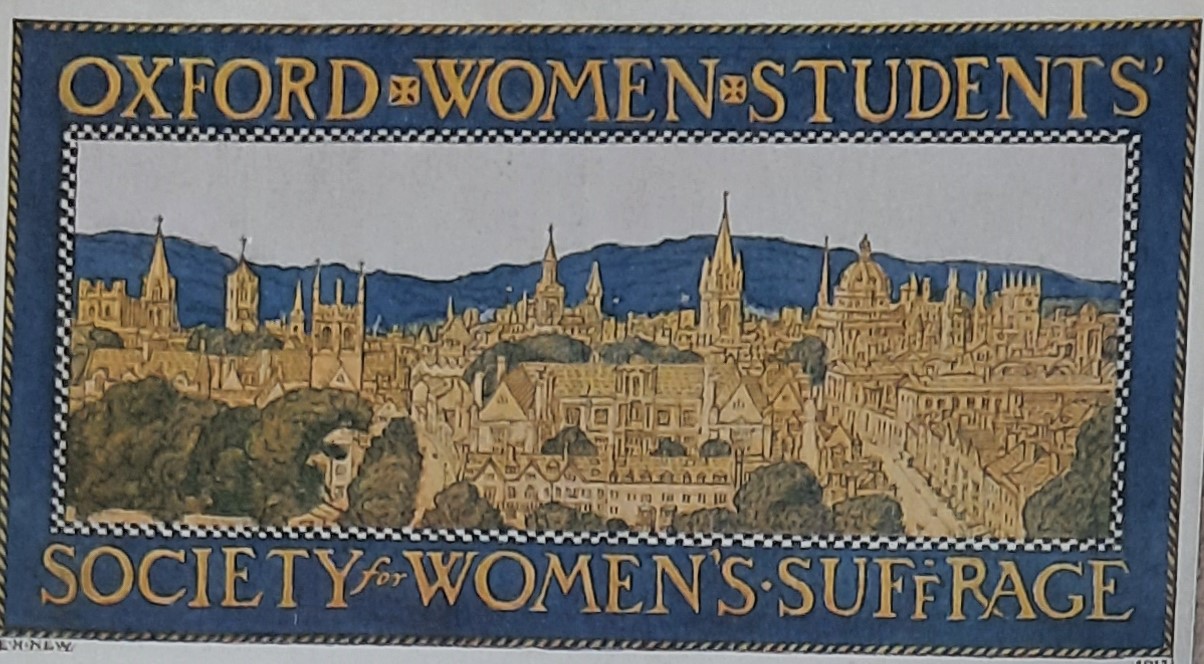 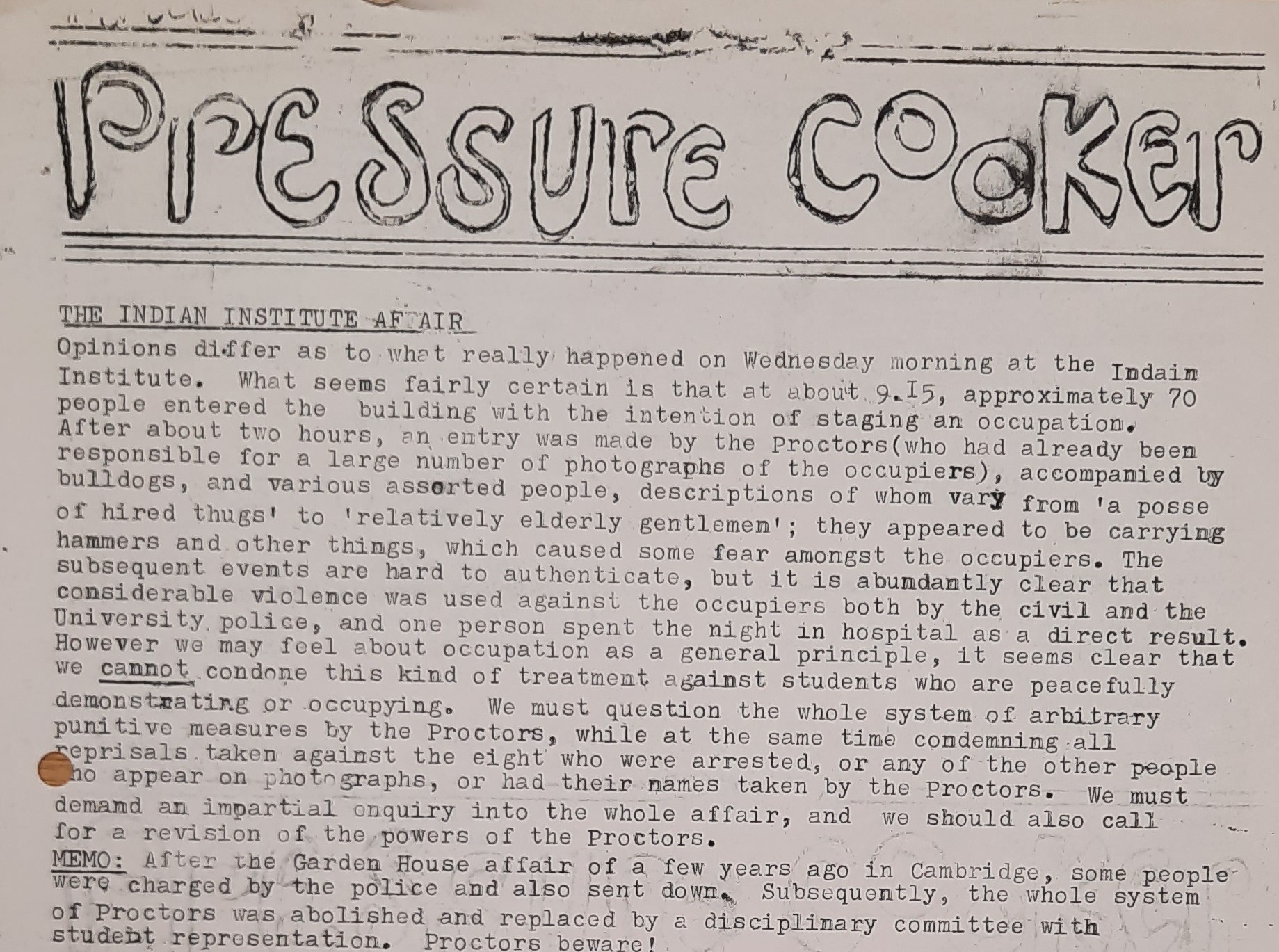 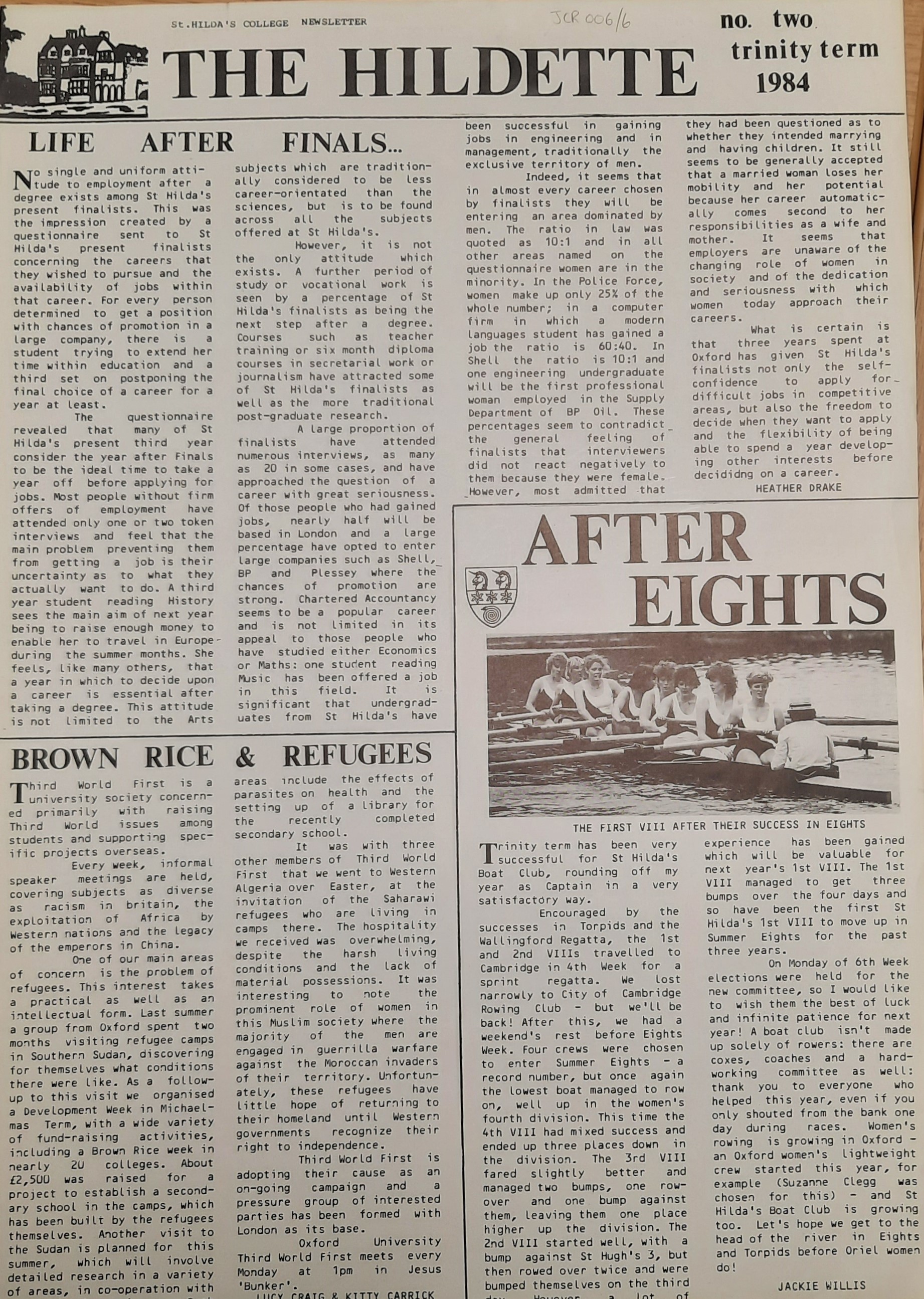 The College Library and Archive holds a wealth of material both to inspire student drama, and to document student drama as a record of College life. Examples of such material are now on display in South Foyer.

Aphra Behn (1640?-1689) is renowned as the first English female writer to make her living by her pen. The College Library holds two plays by Behn, Sir Patient Fancy and The Luckey Chance, both in editions printed within a year of their first performance. These works were kindly donated by Miss Wakefield-Richmond, an alumna of the College, whose BLitt centred on Behn. She thought St Hilda’s a fitting home for them because ‘Behn held that women "having equal education with men" are capable of equal achievement, a very advanced opinion for her day’. The College’s special collections are filled with material showcasing of the achievements of women.

In the summer of 1906, students staged the 16th-century play, The Arraignment of Paris, in the grounds of St Hilda’s Hall. An annotated script recording details of the production was donated to the Archive by St Hilda's first Principal, Esther Burrows (Principal 1893-1910). The Archive contains cast photographs, handwritten musical scores, and notes on this production, giving a rare in-depth insight into a specific student performance at that time. The Archive also holds a photograph of a performance of Hamlet in 1916 – can you identify in which College room the picture was taken? 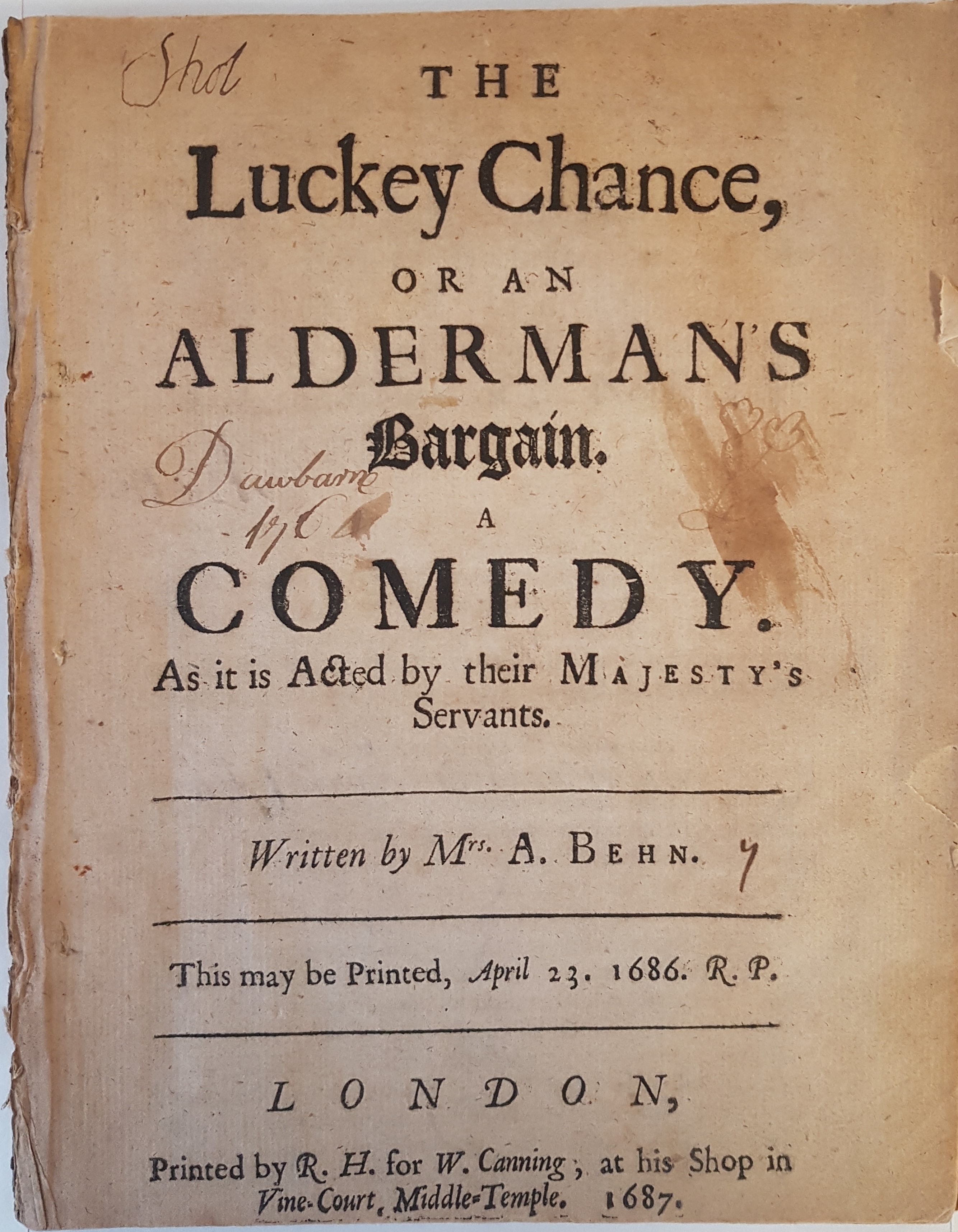 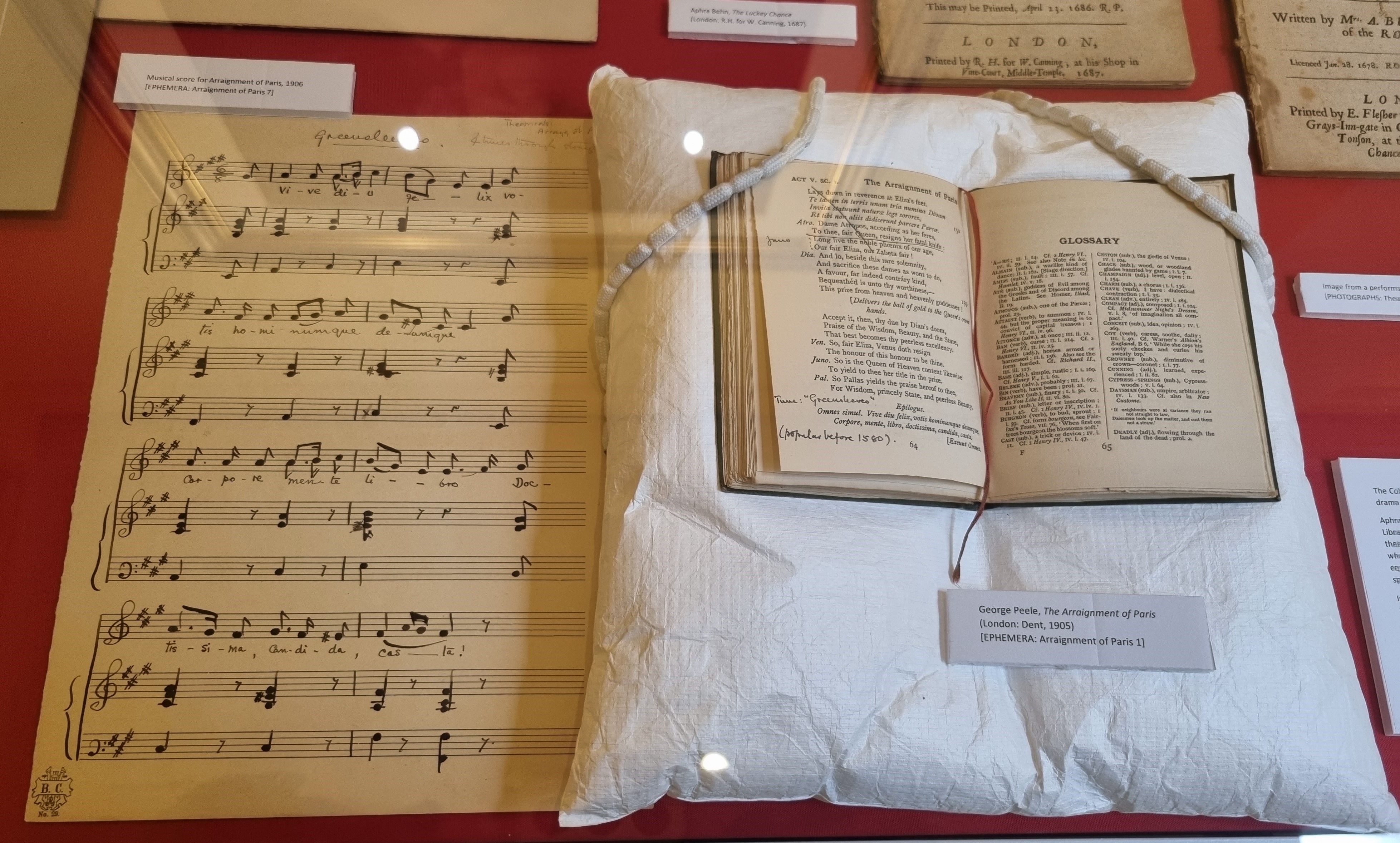 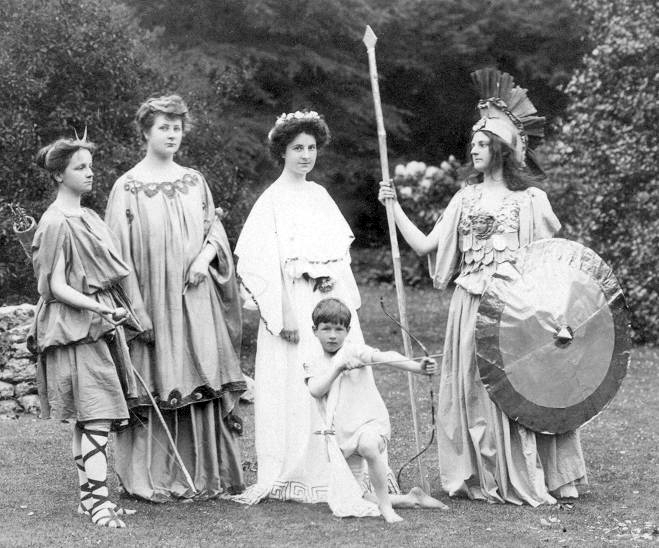 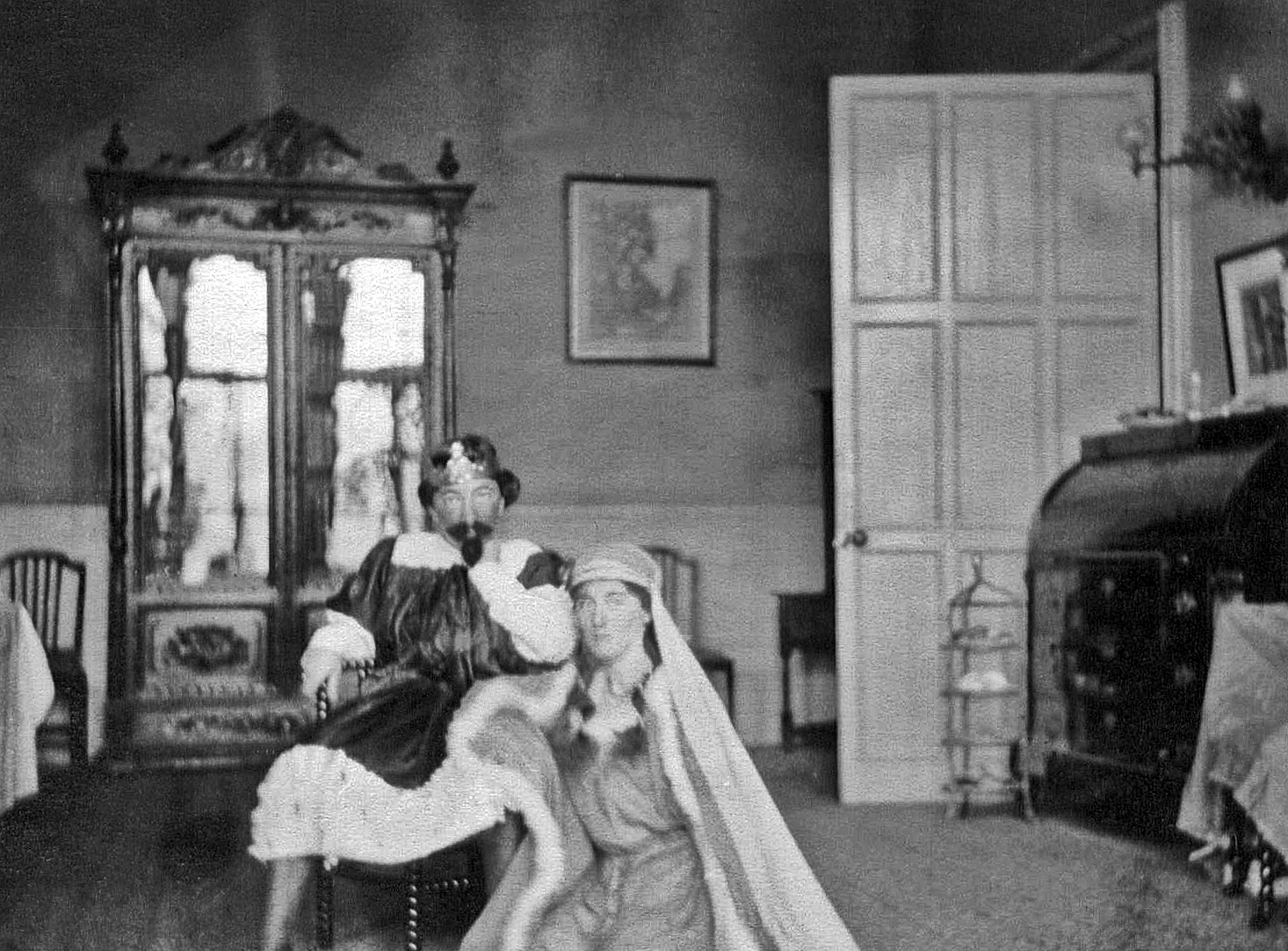 Deputy Librarian Eleanor Kelly takes us through the study of science in the earliest days of St Hilda's, and shows us some of the scientific works in the College Library Special Collections.

The end of the nineteenth century saw increased demands to provide women with access to Higher Education, including in science subjects. The Association for the Higher Education of Women in Oxford (AEW) was formed in 1878 to promote the education of women in Oxford and organised the lecture and instruction of women students. In 1879, Mr Augustus Vernon Harcourt became the first member of the University to admit women to his chemistry classes, and he encouraged the AEW to persuade other Physical Science lecturers to do the same. Progress was made in 1883 when the AEW successfully gained permission for the Delegacy of Local Examinations to use the University’s undergraduate papers in Honour Moderations and the Final Honours Schools of Modern History, Natural Science and Mathematics for women.

Societies were set up towards the end of the nineteenth-century for all women students, bringing together women from across Oxford in different women’s halls and Home Students. The X Club was founded in 1897 for the discussion of scientific topics. Edith M. Hughes, St Hilda’s 1894-97, was its first president. She read botany and was the first St Hilda’s student to take the Honour School of Natural Science.

Whilst the founding of St Hilda’s by Dorothea Beale in 1893 coincided with the increasing demand for women to be educated in science, it is difficult to ascertain whether several early science books left to the College in 1909 by Miss Beale were originally acquired for their textual content or for their material value.

One of these early science books was Hugo Grotius’ seventeenth century edition of the Phaenomena of Aratus, the earliest systematic account of the constellations. Grotius engaged Dutch engraver Jacobus De Gheyn to create engravings for his Aratea which were based upon a ninth century illuminated manuscript copy owned by Grotius. There are over 40 engraved plates depicting charts which show the constellations, including star alignments and figurative illustrations.

Flatland: a romance of many dimensions by Edwin Abbott Abbott was also left to St Hilda’s by Miss Beale. In addition to examining dimensions, this satirical novella commented on Victorian culture whereby women were depicted as line-segments and men as polygons. Whilst the book did not garner a huge reception when it was published in 1884, it would gain momentum after the Einstein’s general theory of relativity was published.

The 1920s and 1930s saw the purchase of many science books bought from the Library Fund and subsequent decades saw further donations of early science books to the rare books and special collections. Robert Burton’s The anatomy of melancholy was first published in 1621 and a copy of the fourth edition is held by the College. The anatomy of melancholy is considered as a pivotal work in examining mental and emotional disorder in the early seventeenth century, drawing on psychology, physiology, astronomy and theology.

Robert Boyle described the first controlled experiments of reducing the pressure of in his work New experiments physio-mechanical, touching the spring of the air, and its Effects, first published in 1660. A 1662 copy was donated to the College in 1974 by Miss Wade White. Boyle was regarded as the first modern chemist, and his book outlines 43 separate experiments, described in detail so that the reader could reproduce them if they wished. The 1662 edition contained an addendum, Whereunto is Added a Defence of the Authors Explication of the Experiments, Against the Obiections of Franciscus Linus and Thomas Hobbes, which detailed what is now known as Boyle’s law, the inverse relationship between the pressure and volume of a gas. 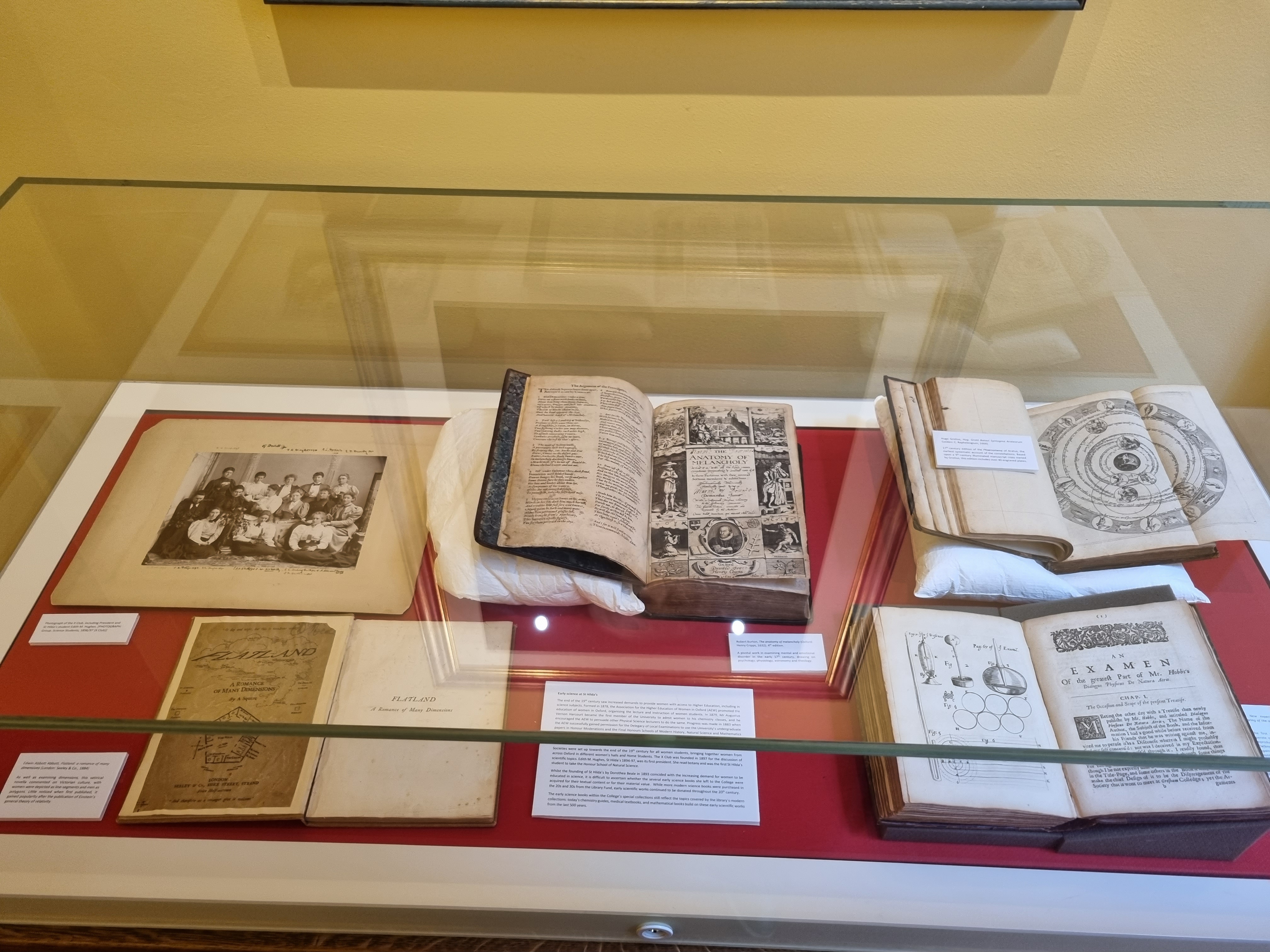 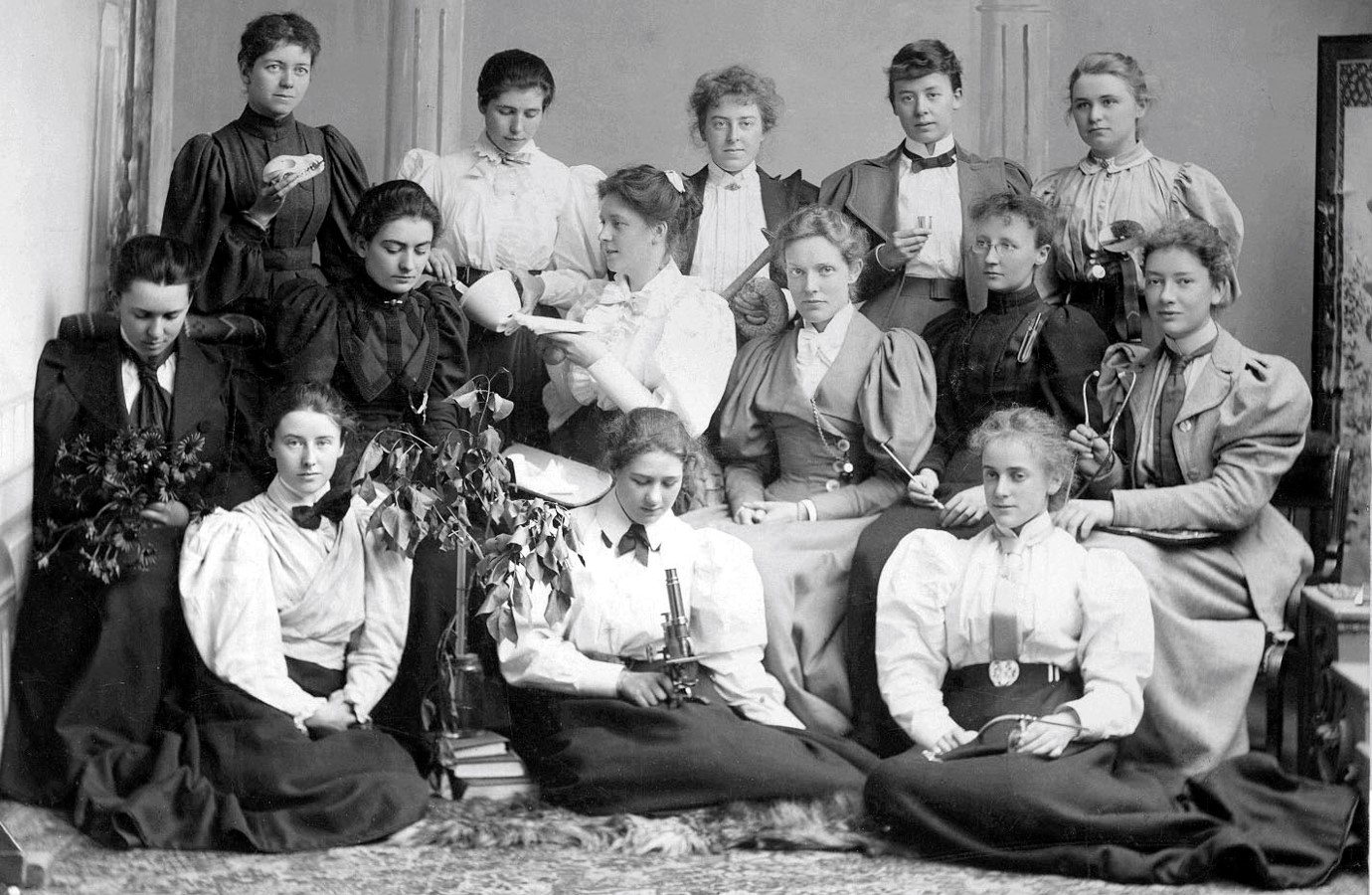