Professor Helen Swift (she/her) became a Fellow of St Hilda's College in 2005. She teaches French language and Medieval French literature, and lectures for the University on a variety of medieval topics from 1100 to 1530, as well as on Old French language and certain aspects of critical theory, women's writing, and literature and the visual arts.

Helen's research interests straddle the late medieval and early modern periods, looking at the poetics of vernacular literature between 1330 and 1550; she is especially preoccupied by issues of narrative voice. A particular interest, pursued in her doctoral thesis, concerns literary defences of women written by men from 1440 to 1538. Her work is interdisciplinary, in that it often involves visual studies of text-image relationships, as well as studying the history of the book in this period of transition between manuscript and print cultures. She also integrates critical theory into her work as a tool for opening up new perspectives on earlier literature to modern readers. Her first book, Gender, Writing, and Performance, examined the literary and rhetorical structures of literary defences of women written by men in the period after Christine de Pizan. Her second book, Representing the Dead, addressed issues of identity construction and narrative voice in response to the question 'Who am I when I am dead?'

For more on her research and her academic publications, see Helen’s Faculty profile.

To help prospective undergraduate applicants better understand the University admissions process from a tutor's personal perspective, she completed a tutor's-eye-view video diary of the interview period when she was Schools Liaison Officer for the Modern Languages Faculty. During the COVID-19 pandemic, she contributed to the Postcards from St Hilda’s Lockdown Blog.

Helen served as Assessor of the University in 2020-21. She is currently Communications Fellow for St Hilda's and Academic Lead for Equality, Diversity and Inclusion in the Humanities Division. 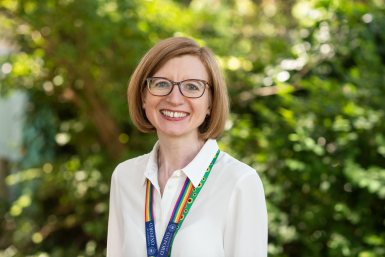