This book cover of Mein Kampf must be one of the eeriest in St Hilda's College library.

Through her research for her MSt in English (1900 – present), Anna Weber has tried to work out the dynamic between the two labels, St Hilda's and the swastika. Does the library sticker overrule the swastika, turning this book into a library copy like any other? Does the swastika stain the library tag, complicating the notion that all books should be freely accessible in a library? The book is a 1939 English translation of Mein Kampf, published by Hurst and Blackett. Anna is currently researching the book's publication history in Britain, which strongly contrasts with Mein Kampf's fate in many other countries. While it was completely banned Germany until 2015 and has since become available only as a critical scholarly edition, Mein Kampf has always been freely available in the UK. Although this fact raises difficult ethical questions, there has been virtually no recent research on the history of Mein Kampf in Britain. This is a blind spot that Anna tries to tackle in her course on ‘Theories of Text, Bibliography and Book History’. English was the first language that Mein Kampf was translated into (in 1933, even before Italian) and Mein Kampf became a huge bestseller in the anglophone market (in some cases it still is today, for example in India).

English-language publishers mostly justified publishing this book by pointing out that the public needed the opportunity to educate themselves about politics in Germany, or in post-war times, about the history of fascism. However, Anna’s argument is that the presentation of English-language Mein Kampf editions (cover design, typeface, etc.) often replicated the German original, turning Mein Kampf into a fetish object rather than presenting it as a highly problematic source text. The photograph encapsulates how problematic fetishization and a genuine striving for information/education about politics and history in Germany interlock in English editions of Mein Kampf: the swastika and the Hilda's library label compete for dominance of the cover. 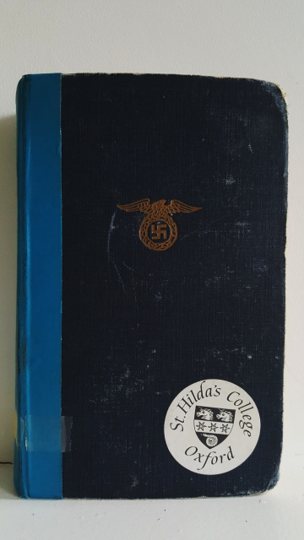