The early students had little opportunity to join the social life of the City and University and so arranged much of their own entertainment. Tea and cocoa parties provided a place for both serious and frivolous conversation, and societies were formed for discussion. Social evenings included charades, concerts, dancing, whist and plays. After the first world war, when women became members of the University, undergraduates began to join University based societies.

The College had very little money. The Principal ran the domestic side herself until 1902, when the first of a series of housekeepers was appointed. Originally there was a staff of one cook, two resident maids and a gardener, with extra cleaning women in the mornings. Conferences were in occupation during the vacations from the earliest days and were vital to the finances; even the Principal's rooms were let out. Students were encouraged to work in the Library, so as to save on fires in student rooms. Eventually there were too many students for the Library and the students worked in common rooms.

In the early years St. Hilda's as a body made no bones about its enthusiastic espousal of the women's suffrage movement. The Debating Society was affiliated with the National Union of Women's Suffrage Societies and prominent campaigners visited St. Hilda's. Such enthusiasm was not surprising in a society of women kept outside the mainstream of University life and occasionally encountering such opinions as these, expressed by the editor of the Isis in May 1897:

'The ladies who visit Oxford at this period of the year [Eights Week] come to enjoy themselves, and are unhampered by anything in the nature of an ulterior motive. They can see a B.A. without envy, and can converse with a M.A. without experiencing any desire to denounce him forthwith as a tyrant or a usurper ... The Ladies ought really to be satisfied; Woman is much nicer than Man, she is better looking, cleverer, more useful altogether. She is endowed with numerous and invaluable privileges, including the most constant companionship of that most useful of all implements, the hair pin. Why should she want more?'

On the evening of Friday 12th June 1908 there was an attack on The Wild Goose, the half-rigger which had been 'proudly bought' by St. Hilda's in 1899. A new back rail was needed, a pair of new sculls, repairs to the canvas cover and a new rudder. Investigations suggested that a party of drunken youths was probably responsible, but it was also thought that the damage may have been caused by male undergraduates who disapproved of suffragists.

The rules of St. Hilda's Hall in 1898 dictated that 'students … are only permitted to visit Colleges, men's rooms or lodgings, to go along the towing path, to attend College Chapels on Sundays, or the Choirs of College Chapels on week days, if accompanied by a member of the A.E.W. Committee (Association for Promoting the Higher Education of Women), or by some relative of suitable age approved of by the Lady Principal, or by the Lady Principal herself. They are at liberty to walk, cycle, or boat alone with their brothers, but at other times it is preferred that they go out two or more together, especially into Town.' It was further declared that 'Students who have gentlemen visitors other than father, uncles or brothers, may receive visits from them on Tuesday afternoons, or, by special permission only, at other times. No student to accept invitations from gentlemen not known by their parents or guardians, or who have not been previously received at St. Hilda's Hall by the Principal.'

There were sound reasons for such rules in an Oxford suspicious of the presence of women, and a Hall predominantly catering for girls who had been brought up with the expectation of 'coming out' followed by a suitable marriage. The rules were partly designed to prevent male lecturers from finding cause for complaint, for there were many who were opposed to the admission of women to lectures, and partly to satisfy anxious parents, afraid that their daughters' marriage prospects might be compromised.

The rules continued for many years, often to the great inconvenience of students and staff alike; the Principal spent much of her time as a chaperone. In 1909 an A.E.W. report stated that 'it is a rule well understood by women students, that attendance at College lectures is not to be made an excuse for conversation inside or outside the lecture-room. There is also a general rule that young students do not go alone to College lectures.' The greater freedoms enjoyed by women during the first world war led to some difficulty in sustaining these rules, but it was only in the mid 1930s that they disappeared, when the rule that at least two women must be in any mixed party was abolished. 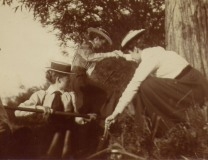 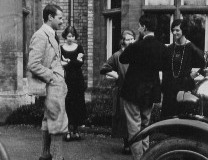