Dr Jonathan (Huw) Williams is a renowned conductor, orchestrator, composer and musicologist. Recent highlights include standing in for Sir Simon Rattle, composing for a new Sony video game and the release of a CD with the Orchestra of the Age of Enlightenment. He is the director of the Rameau Project and is currently co-editing a volume on Rameau. Jonathan will conduct Les fêtes d'Hébé in Paris and London in 2017. Appointed as the College's first Director of College Music in 2006, Jonathan organises many of the music activities in College, including the popular weekly lunchtime concert series and a full programme of events for the College Choir and Orchestra.

Jonathan has taught at the Guildhall School of Music & Drama (1994-2003) and has lectured at the Royal Academy of Music, Morley College and the Academy of Contemporary Music. He has taught Orchestration at Oxford since 1992 and is much sought-after for his tutorials which analyse the great composers' orchestral works. Other topics taught include eighteenth-century opera, conducting, and composition for the moving image (particularly for video games).

Jonathan is the founder and director of the Rameau Project, a major research venture seeking to advance our understanding of the stage works of Jean-Philippe Rameau. This collaboration between Oxford University, the Orchestra of the Age of Enlightenment and Rameau scholars, musicians and dancers worldwide, began with the modern première of his Bärenreiter edition of Anacréon (1754) in Oxford in 2012. Thanks to generous fellowships from the Oxford Research Centre in the Humanities (TORCH) and the University’s John Fell Fund, Jonathan’s work continued during 2014 (Rameau’s anniversary year) with a recording of Anacréon for Signum Classics, numerous BBC broadcasts, an international conference and the performance of three Rameau operas with the OAE at the Queen Elizabeth Hall, London. He is currently co-editing a new volume on Rameau for Routledge and will be conducting the modern première of Les fêtes d’Hébé in Paris and London in 2017.

In the studio, Jonathan has created award-winning music for TV and film. His work as composer, orchestrator and conductor at Abbey Road studios can be heard on orchestral soundtracks with sales of over 60 million copies - most notably with Emmy award-winner Sean Callery (SKY’s 24) - and for the Novello award-winning score for Sony’s video game Killzone 2. 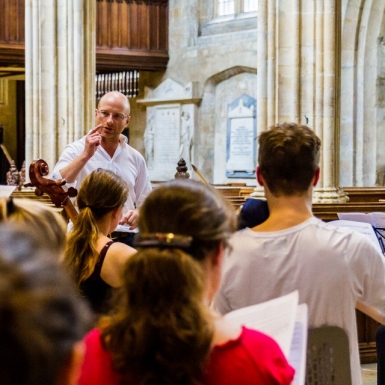