St Hilda's Anniversary Building and Pavilion were officially opened on 25 September 2021 by four former Principals of the College. The opening ceremony is available to watch here.

The building programme that has transformed our College site began in 2018 and officially ended with the opening of the two new buildings. Lord Mayor of Oxford, Councillor Mark Lygo, Jay Gort, Fiona Scott and colleagues from Gort Scott architects, Mark Beard and colleagues from Beard, and many members, friends and supporters of St Hilda's joined us to celebrate.

Acting Principal, Dr Georgina Paul, welcomed our guests. She went on to congratulate all those who had been involved in the project, from the early stages when Gort Scott's entry in the design competition run by Malcolm Reading Consultants and their vision for St Hilda's impressed and inspired the College's Governing Body. Dr Paul thanked those who inputted into the plans, including Oxford Preservation Trust and Oxford City Council's planning department; and Beard construction and all the contractors who worked with them on the buildings that we see today. It is particularly impressive this happened on schedule and within budget, due to Beard working safely on site during the global pandemic. Finally, Dr Paul thanked all College members who worked and studied here during the building work. Particular thanks went to Sir Gordon Duff, College Principal at the beginning and end of the project; Neil Hyatt, Head of Buildings and Projects at St Hilda's, and Horticultural Consultant, Walter Sawyer, who has worked with Neil and the Gardens team to transform the grounds and embed the new buildings into them.

Gort Scott's original concept of a College with a Pavilion on the river at its heart and a further building, the 'third sister' to Hall and South Buildings, has been realised. Thank you and congratulations to everyone who made this happen!

Excellent opportunities are here for donors to make their mark and shape the College – including the naming of the riverside Pavilion, our wonderful new teaching space. For those whose favourite parts of the College include its lovely gardens, we invite donations to a fund to create uplifting surroundings and actively support sympathetic and sustainable plantings, trees, meadow flowers, and habitats in which wildlife can thrive. 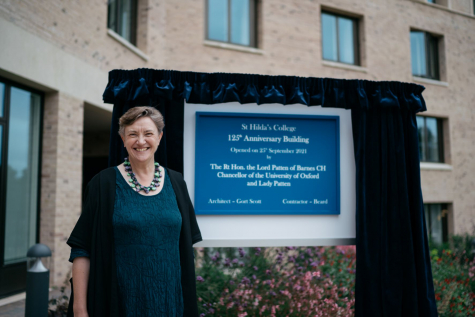