Baroness Susan Greenfield is a leading scientist, author and broadcaster on the subject of the brain and consciousness. Awarded a CBE in 2000 for her services to the public understanding of science, and later made life peer, Baroness Greenfield regularly gives public lectures, and appears on radio and television and is the author of a number of books about the brain and consciousness.

She has created three research and biotechnology companies: Synaptica, BrainBoost, and Neurodiagnostics, which research neuronal diseases such as Alzheimer's disease. As well as several honorary degrees, the CBE and a life peerage, she has been awarded the Royal Society's Faraday medal, and the French Légion d'honneur. She is currently Professor of Synaptic Pharmacology at Lincoln College, Oxford, and the first woman to be installed as Chancellor of Heriot-Watt University, Edinburgh.

My first memory of St Hilda's was of the river and the beauty and tranquillity of the site.  My father, who brought me down at the time was, however, most impressed by the giant stilton that he could see through the SCR window.  I always remember in the first few days the warmth and friendliness shown to all us newcomers as we congregated in the Hall JCR for our various introductory briefings.

Some of the friends I made at that time I still see even now, almost 40 years on!  We have all gone in very different directions but the spirit of camaraderie engendered is something that I still regard as very precious.  Of the many memories that St Hilda's has given me at such a formative time in my life, has been the enormous support of my then tutor, Dr Jane Mellanby.  She famously came up with the idea that "it would be a hoot" if I were to become a scientist.  Without her hard headed but humorous support I would never have ended up as a research scientist.  Other memories are of Mrs Austin, who taught philosophy, curling up in her chair wreathed in cigarette smoke and really forcing me to think hard and deep.

At the time we were of course one of the five women's colleges with no mixed colleges at all.  Hence we were in great demand and I feel that St Hilda's offered a kind of sanctuary in to which we could retreat from the excitements of the wider university life, not least to consolidate and plot our various personal  and romantic adventures.  There is no single occasion that could summarise easily the whole range of different experiences and emotions, not to mention insights that I gained from both my academic and social life at St Hilda's, but I do know that I will treasure all of them. 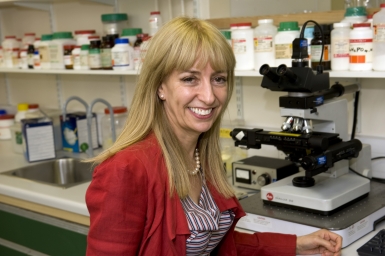