Baroness James of Holland Park OBE (1920 - 2014) was a life peer in the House of Lords. She was also commonly known as P.D. James, Queen of Crime and winner of numerous international awards for her novels. Her works have been adapted for television and broadcast on ITV in the UK and PBS in the United States, and in 2006 one of her novels was adapted into the feature film Children of Men.

Baroness James received Honorary Doctorates from several universities and had a long record of achievement in many roles; as a Governor of the BBC (1988-93), Chairman of the Literature Advisory Panel at both the Arts Council of England (1988-92) and the British Council (1988-93). She also chaired the Booker Prize Panel of Judges in 1987 and was President of the Society of Authors from 1997.

Her association with the College began in the 1990s, with invitations to speak at the St Hilda's Mystery and Crime conference and the Barbara Pym Society.  Baroness James was appointed an Honorary Fellow of St Hilda's in 1996. She was also a Patron of the St Hilda's Media Network.

Each year the Crime Fiction Weekend holds a dinner in her honour, proceeds from which go to the P.D. James Fund, established in her memory to support the work of the English School and students at St. Hilda’s College. 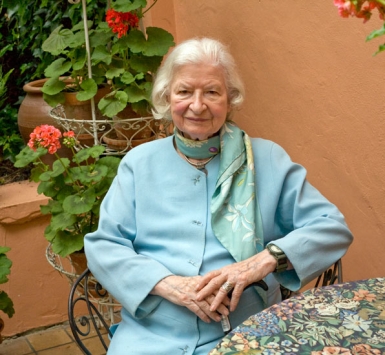